Not As Good As I'd Hoped

As I have noted at least once before, conventions aren't really my thing. I'm too much of a hermit to really like the idea of going out among the crowded masses of a convention hall no matter how much the topic at hand (one form of nerdity or another) might interest me. I like board games, and RPGs, and the like -- I mean, hell, I have my own gaming company, Dodeca System Games -- but if I didn't have to be at a convention to sell my wares I wouldn't go to these things. 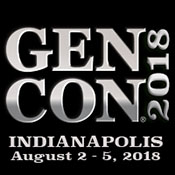 That makes me a very poor fit for GenCon in general. As the largest gaming convention in the U.S. (at least when it comes to traditional, tabletop gaming), GenCon is a crowded mass of people. It's a place I would avoid at all costs, even going so far as to take extra time off from work just to avoid being downtown while the convention was going on. I really, really don't want to be there, and yet this last weekend was the third time I've attended for all four days. I wouldn't say it was hell, since I had a booth and I could hide there for most of it, but my experience is probably much different than that of most of the attendees.

I probably wouldn't even bother discussing GenCon 2018 at this point were it not for the fact that this last convention seemed really off, and not just for me. As a exhibitor I get to chat with the other guys there selling their wares, go over before the show every day and just shoot the breeze. This part of the experience I like, the calm before the storm when there's just a few stray people walking around and a large hall for me to casually peruse. The remark I kept getting, though, from everyone was that the show really sucked for sales this year. For most of us, sales were way down, and I heard more than one booth discussing the fact that they probably won't be able to come back again.

Now, I didn't get hard numbers, but let's look at it from my own past experience. GenCon booths aren't cheap, starting at $1,800 for a basic booth if it's your first show (although that was the price I paid in 2016 and I think they just raised rates by a couple of hundred bucks). After a year as a vendor they slice a $200 off the price, and once you've gone three years they slice another chunk off (although, again, they just raised prices slightly across the board). At a minimum, at this point, you're going to pay $1,500 for a booth, one you aren't allowed to share and that has to be dedicated to your specific product line (whatever it may be). That's not a small chunk of change, especially when other (admittedly smaller) conventions in town charge $200 to $400 for their booths.

Looking at sales, in past years my company broke even. For us, that's great as we can then, essentially, use GenCon as advertising. "Here are our wares, please check them out. And then tell your friends. And their friends." And we're one of the lucky ones as most companies are not expected to recoup their money at GenCon. This year, for a comparison, we made half as much as in previous years putting us $800 in the hole. Sure, that's not bad for advertising, and I'm not really all that upset, but we're lucky enough to largely ride in the black year-to-year so our finances can take a minor hit here or there and we'll still at least be able to skim by. Other companies, that already had to drop a ton of money on the booth, plus shipping, hotels, on and on -- that's a huge hit to take and I wouldn't be surprised if a number of them go under because of it this year.

As noted, this was an across the board phenomenon this year. Big and small vendors were complaining, from the little card companies like my group to the large leather costume sellers (who usually make money hand-over-fist). If the big guys can't make money at GenCon, something is seriously broken, right?

Looking at it, I think we have a few different factors that contributed to lower sales for the vendors this year. First, we have to acknowledge the outside forces at play. Namely, I talking about the U.S. economy. There have been discussions going for a few months now that we're headed for a recession, or at the very least an economic downturn. One of the first strong signs this is happening is a reduction in consumer confidence (i.e., people spend less). Whatever your politics may be, there are certain things beyond the government's control (stock market, housing market) and some things well within the government's control (tariffs, bail outs, taxes). It's certainly possible to goose the economy with a tax cut or some bail outs, but our economy has been humming along for a while now with low unemployment and a booming stock market. This has been going on for years, long since before the start of the current administration.

I mention this because the choices the current administration has made (such as tariffs and tax cuts) are usually the kinds of things you do in a down economy, not one that is humming along. These kinds of things, deployed during the boom years, can actually suck the oxygen out of the economy, causing a downturn.

A refrain I heard pretty regularly this convention weekend was that "I just don't have enough money for everything I want." Now, sure, nerds will go to a convention and blow a ton of money pretty quickly then realize, "oh crap, I need to eat, too." So hearing this once or twice is pretty normal. As regularly as I heard it, though, seemed to stand out. It's circumstantial, to be sure, but coupled with actions of the current U.S. government, I think it's worth a consideration that consumer confidence is taking a hit, which could explain the money woes of many of the attendees.

Of course, you have to factor that into the price of tickets for GenCon. A 1-Day pass is $70, a 4-Day is $110. Those are pretty steep prices for a single ticket, comparable to an amusement park. And, like an amusement park, they get you coming and going by charging you for a lot of stuff in the convention as well. GenCon is particularly bad about this, charging you paid tickets for every single demo you want to play, every game you join. And then when you factor travel, hotels, and food on top, it's not unheard of to drop $1,000 on the weekend just to be there and play a few games.

And then we have to look at attendance, which was way up this year (record breaking, from what I saw). One would think that's a good thing, but part of the reason attendance was up was because GenCon spread out further, having more room for more people. When a convention spreads out like that though (moving well beyond the convention hall to all the hotels around the convention center as well was the stadium across the street), that's more for people to see and less time they have to go to any one area and really focus. With the amount of space GenCon takes up now, the Exhibit Hall just isn't a priority for many people like it used to be.

Long run, I don't know what could be done to fix this issue. Certainly GenCon isn't going to want to condense back down -- once you start advertising record tickets sales it looks bad if you can't keep it up. If you shrink your convention, that's less bodies that can attend, less tickets you can sell, less money you can make as you get them coming and going. Right now, and probably for the next few years, GenCon won't really have any incentive to fix this "problem". But bear in mind that their Exhibit hall is expensive to be in. If sales continue along this pace, it's not hard to see a lot of people bailing on their booths.

If booth sales take a hit, would GenCon lower prices? Maybe eventually they'd have to, but again I don't know if they really will want to. Right now, when the expectation is that to have a "game company" you simply must be at GenCon, a lot of the little guys are going to get eaten alive at this convention, and the gaming market will suffer from a lack of diversity because of it.