Your Ingredients May Be Better, But What About Your Soul?

I've avoided addressing the ongoing Papa John's controversy up until now. As you know, I don't like to get all that political on this site largely because it serves no point -- those that agree with me already agree with me while those that have differing political opinions will stand violently opposed to everything I say. It does no good to get in a shouting match online and while this is my stage and I have the microphone, I don't tend to see the point in it. 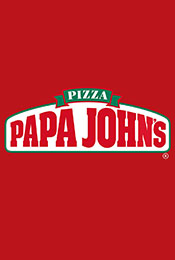 However, the one-time CEO and chairman of Papa John's, John Whocarsabouthislastname, is apparently a hugely racist bigot and keeps sticking his foot in his mouth. While I don't talk politics on this site I do talk food, so let's dive in on the topic of Papa John's, food and controversy, and see where we stand when this article is done:

To begin with, let's discuss the food at Papa John's. Back when I was in college I really enjoyed their selection. I thought their prices were great (because they offered a student discount) and a number of their items, like their buffalo wings, were delicious. The wings were a standout for me, deliciously fall off the bone but still moist and flavorful. I've tried these same items recently and wasn't as impressed. The last couple of times I've gotten the wings they were dry and flavorless. I know people that love their cheesybread, but either my tastes have changed or they've switched cheeses because the cheesybread is more salty and greasy than I remember.

Of the big three chains -- Pizza Hut, Dominos, and Papa John's -- I still like Papa John's pizza the best. Admittedly, this is a kind of bottom-of-the-barrel selection as none of their pizzas are great. I do much prefer to grab a nice artisan pizza from a local joint (like Jackamo's Pizza here in Indianapolis), but if I have a party going on and I need to get pizza quick, I'll lean towards Papa John's.

Well, okay, even that's just the case because the Donato's near me has the worst service possible. Maybe I'd remember to include Donato's in my list of big pizza joints if they didn't suck all the time.

As I was say, I tend to find Papa John's pizza to be the most appetizing of the big three. Pizza Hut has always been too greasy for my tastes -- my hands, plate, napkin, box, table, chair, and carpets always end up covered in a thin layer of grease after eating Pizza Hut (and only some of that is hyperbole). Meanwhile there's something about the taste of Dominos that is just... okay. Like, it's pizza sure, but it's very middle of the road, almost bland, pizza. In a choice between the big three, Dominos is last (and, honestly, I might just order Donato's instead, crappy service and all). 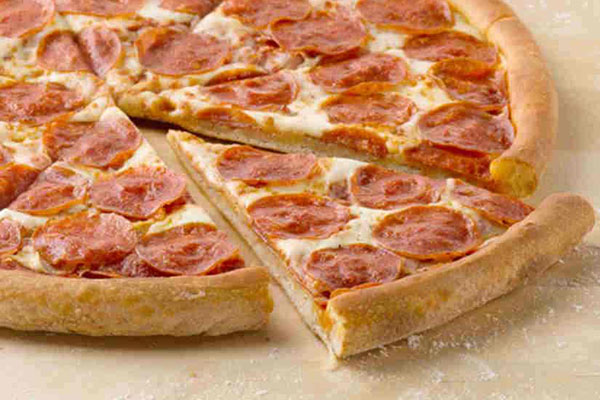 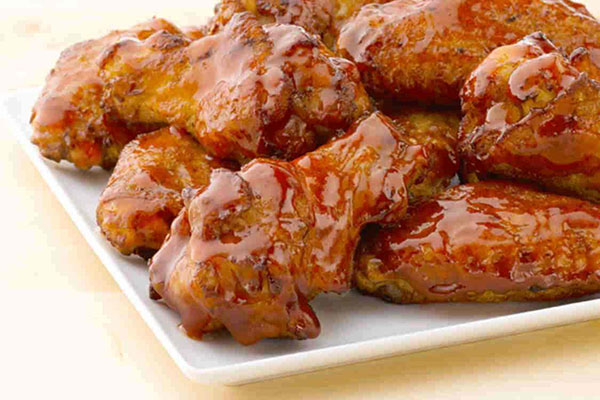 Papa John's pizza, though, has a fluffiness to the crust I like, and their pizza sauce has a robustness to it I enjoy. Their pepperoni is spicy and flavorful, and I enjoy pairing it with mushrooms for those times I get a two-topping. I recognize I'm in the minority, as many online commentators will write screeds about the awfulness of Papa John's food, but I rather the pizza, at a minimum.

Actually ordering from them now, though... that's a different matter. It's weird to me that we have this divide in the United States over the NFL players and their desire to take a knee in protest (over system racism) during the National Anthem. I am, of course, ultra-liberal and a hardcore Democrat, so right off the bat it's already clear I'm going to be all for free speech in all forms. If someone wants to do something, say something, whether it makes them look good or not, that's on them. I actually happen to think them taking a knee is a very appropriate form of expression.

Sure, the 36 U.S. Code states that all people should stand for the National Anthem, but then 2 U.S. Code 285(b) states plenty of rules about the flag and how to display it that people don't follow. Most of the people not following those rules about the U.S. flag are the same ones bitching about NFL players taking a knee. Did you know that you aren't supposed to wear the flag in any form? Or display it at night without a light on it? And that if it's torn or damaged you're supposed to burn it? Burn the flag. That's actually required. Sure, you're supposed to do it in a special ceremony, but the most respectful way to dispose of your damaged flag is to burn it.

People don't follow those rules, of course, nor do I expect them to. I'm enough of a rules snob that were I to fly a flag I'd have to follow every rule about it to the letter. Which is why I don't fly one. Damn, that is way too much effort. But if you (as a citizen of the U.S.) want to wear your flag, or hang it improperly, or do whatever else you do with a symbol of the United States, that is your prerogative. While you're doing it, though, don't get up in arms about some other people having a quiet protest during another symbol of the country. 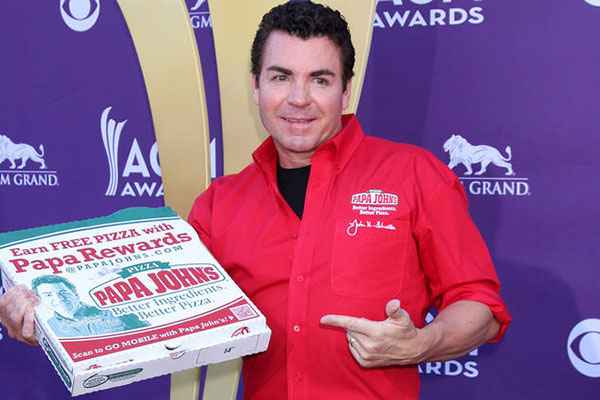 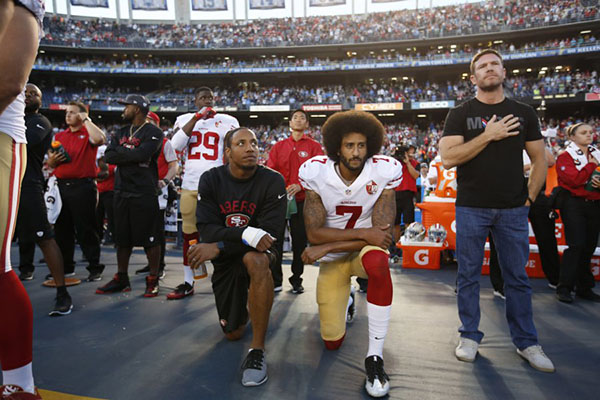 The reason we got onto this topic, of course, is because the then-CEO of Papa John's, John Whateverthehellhisnameisnotlookingitup, came out strongly against the players of the NFL taking a knee. Among various gems, he stated that because Papa John's was the official pizza of the NFL (we'll cruise past how dumb it is that athletic events have official pizzas), and the protests were going on, it hurt Papa John's bottom line. Sure, the Papa had a bad quarter or two, but not all the blame (or maybe even any) should be laid at the knees of the players. Maybe more and more people are just finding their pizza to be gross. Maybe the issue is how a certain president has made the quiet, peaceful protests into a big thing.

Of course, this really shouldn't have come as much of a surprise to anyone that pays attention. John of Papa John's went on the record repeatedly with ultra-conservative positions. He's been know the lament, at great length, about how paying his employees a fair wage (back when minimum wage was only around seven bucks) would cause the company to go under. Then he'd go out to his private country club, donate millions to Republican candidates, all while trying to say, with a straight face, that he's going broke. And hey, the man has millions to spend so good for him -- spend it as you like, John. Just know that people actually pay attention to what you do and what you say.

Which, speaking of, the man behind the Papa went on quite the screed on Twitter about the NFL players (which you can find at least in archives on his twitter account, I'm not reposting them here). There was a strong backlash from pizza eaters, the NFL dropped the Papa as their official pizza, and Papa John's took another hit to their bottom line. So John Idiotwhoshallnotbenamed stepped down as CEO but remained on as the chairman of the board and face of the company. A kind of punishment, I guess, but he probably was still making millions as chairman, more for his likeness rights. I doubt this really hurt his bottom line at all. And probably that would have been end of it if the man had just remained quiet.

However, during a more recent incident involving a PR firm (that, ironically, was hired to keep Papa John's out of future PR disasters), Mr. Papa John was lamenting the state of racism and, in discussing language you were no longer allowed to us, used the n-word white people should not say. It was recorded, and released, and then the Papa stepped down from Papa John's.

I don't recount all this to poke at the guy and say, "ha ha, conservatives are all racist." They aren't. Clearly Mr. Papa John's is a racist, but we're not generalizing here. I mention all this more because I have to wonder about the rest of the company. John stepped down to save face (and probably ensure his shares in the company didn't take a further plunge over his mouth's idiocy), but racism like this doesn't happen in a vacuum. Papa John didn't wake up one day and say, "you know what? I suddenly hate all black people!" He had to be sitting on his feelings for a while and, since he spouted off more than once about it in an official setting, clearly he felt comfortable talking about it with his peers.

His peers, in this case, would be the rest of the board. My point, then, is that while the Papa maybe be out of Papa John's (although even now, a couple of days later, he's regretting is and trying to find a way back in), the rest of the company is probably still corrupt. They had to have known what he was like in private and they must have been okay with it. Even if he had majority shares and couldn't have been kicked out without it being voluntary, that doesn't mean the rest of the board had to serve. When someone regularly spouts of with repugnant statements you can either leave or you're complicit. They didn't step down.

So no, I won't be getting Papa John's anymore. I'll suffer through Pizza Hut if I have to get pizza for a party or I'll just plan better and hit a (much better, local) artisanal joint. The most effective thing you can do is vote with your money, so that's what I plan to do. What you do with your money is, of course, your own choice.