Quick! Turn Back the Clocks!

A World Out of Time

I will admit that book reviews aren't something we handle very often on this site. Movies and video games are, by and large, pretty quick to get through so I can review a lot of them without a huge time investment. Books, though, take me longer to get through -- I'm not a super faster reader, and I like to take my time with written stories, so in the span of time it takes me to watch (and write) 20 movie reviews, I'll probably churn through one decently long book. 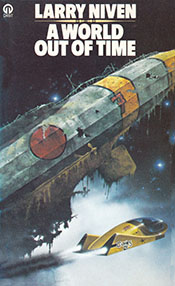 Still, occasionally I will read something that I can then turn around and put up on this site, and today's entry is the 1976 novel by Larry Niven, A World Out of Time. Actually a compilation of a few short stories all about the same character arranged linearly, the story takes to a slightly distant future where our hero (of sorts) Corbell has just been woken up from being cryogenically frozen.

As it turns out, his body didn't survive the process, essentially having to be boiled down so that his memory RNA can then be inserted into a blank host (a human criminal deemed, by the State, to be beyond saving and, thus, had his memory completely wiped). This body, which the main character dubs Corbell II, thus has to learn to assimilate into society, which turns out to be a short amount of time since, eventually, he'll be placed on an interstellar ship (called a rammer) and then sent out to seed other planets with life-giving materials all to provide future humans with new places to live.

Things get more complicated from there as Corbell steals the ship and takes it off in a different direction from his intended route all so he can joy-ride the galaxy. Eventually, though, he heads back to Earth many hundreds of thousands of years later (due to relativistic time travel across vast distances of space) to try and find out what's happened to his home planet.

Niven, as I learned reading this book, writes a pretty hard version of sci-fi. It has a speculative bent with just enough scientific realism to make you go "okay, this could happen for all these reason" but is still just far enough out there to probably not be too realistic in the long term. Hard, but not too hard. Crunchy, then. Crunchy sci-fi. In this particular case, Niven's crunchy book is really about time travel, but the kind of time travel humans could actually achieve -- thus, the hero moves forward in time across many thousands of years while aging much slower, but there's absolutely no way for him to ever go back to his own time. Traveling backwards in time is probably impossible for us to achieve and, thus, it's impossible in this story.

As a story that explores what would happen to a human if they were constantly forced forwards in time,

Once Corbell makes it back to Earth (or so he guesses, anyway), I felt like the book wasn't as interesting. It's definitely a book from the 1970s, and thus the future humans Corbell meets feel like rejects from Logan's Run, child-like begins of super intelligence who just accept the world for what it is and need someone, an adult, from the past to teach them how to be civilized. Maybe that's really where we'd end up long term, but I've seen and watched enough stories from this angle that while Niven's may have been an early example of it, the book isn't a very good version of this type ot story.

Still, the novel is well written enough to keep me reading (I tend to give books 100 pages and if they haven't hooked me by then, I move on). I grabbed this novel from a used book store and I don't regret it -- as I said, the whole middle section of the novel is excellent. I'd certainly grab other Niven books when I'm out book shopping again. if you aren't into crunchy sci-fi about forward time-travel, though, I dunno if this would be a good Niven book to start with (or if Niven is even the author for you). I guess, for me, I'll just have to pick up a couple more of his books and find out.