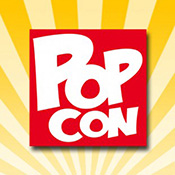 So let's talk conventions. I'll be honest with ya: I'm not a huge fan of conventions. But then I'm not a huge fan of being around lots of people, or loud, constant noise, or, really, being anywhere that isn't my house. My ideal vacation (which I've taken more than one) is one where I stay home but "fail" to tell anyone I'm on vacation so absolutely no one disturbs my peace and quiet. I'm a hermit, basically, and want to be left alone as much as possible. Conventions are, essentially, the worst kind of habitat for me.

For that reason, the only conventions I go are ones where I have a vested interest in the proceedings. Specifically: I'm there to do business. I do a couple of conventions every year in support of my little independent gaming press, Dodeca System Games, but I don't go out of my way to visit any others. I love slasher flicks (and will one day run a site dedicated to them), but I avoid Horror Hound up north from where I live. There's a Star Trek convention in town but you won't catch me there if I can help it. And, if there were ever to be a Castlevania convention, I'm sure I'd find some way to avoid it. Well, that is unless they somehow managed to give me money to do it (or gave me a table to be there so I could sell stuff).

Yeah, conventions are not my speed. I would assume people that know me know this, and yet they always ask, "so, how was your con? What'd you do? Was it fun?"

Let's see if we can answer those questions:

How was Indy PopCon for me?

Well, I didn't have to go to my real job, which was nice. By going to Indy PopCon I took three vacation days from my actual job, so I got paid to be there, plus I sold my games. They did fairly well and we saw a small uptick in sales from the year before. That said, Sunday at the convention was totally dead, much like it was the year before. Seems like the Sunday people at PopCon just aren't interested in buying stuff, as the whole dealer hall was more sparsely packed than on Friday or Saturday. We're seriously trying to decide if, in the future we do PopCon, do we bother doing Sunday or do we just give the table over to someone else so we can relax at home (since there's so little business to be done).

That's not the kind of decision I've had to make at other cons. GenCon, for instance, is so busy all four days that it'd be unthinkable to bail on Sunday even if it's our low sales day -- a low day is still a decent day when we're talking GenCon, and I'm sure for other cons (like DragonCon, or any of the PAX conventions) it's the same. Smaller cons, like PopCon, just do so much less business that sometimes I wonder if cutting a day at the end would be worth it to me for my own peace and quiet.

What'd I do at Indy PopCon?

I sold stuff. From behind my table.

No, seriously, that's the bulk of my con-going experience. I do tend to take time out each day to move around and walk the convention floor just to see what other goods are on offer. A bit of artwork here, a new book there, maybe some toys -- conventions can have some good stuff, not all of it at a horrible markup.

But I don't do much else there. My job at a con is to man my table/booth and sell as much product as I can. I don't go to panels (unless I'm invited to one as a speaker), I don't work events (unless, again, I'm invited to do so), and I don't spend much time away from my area. It's not an exciting con experience, to be sure, but if I wanted excitement I'd honestly be somewhere else.

But it was fun, right?

I mean, I guess. Not being at work was nice. We do see some of the same convention goers year after year, and I like talking to my repeat customers. It's cool to see where they've been in the last year, find out what they're up to, and shoot the shit for a few minutes. Plus, I treat my repeat customers right, giving them extra swag and bonuses.

I dunno if I'd really say it was "fun", though. Tiring, sure, and sometimes it makes me ill (because of con crud). It's certainly an experience unlike any other, but if I didn't do them for business I wouldn't go to them so, yeah... "Fun" is not the word I'd use.

My wife did get to meet LeVar Burton this time, though, so that's nice. Reading Rainbow rules.

Would I do it again?

Well, I've done PopCon four years running now, so yeah, I'd likely go back. The business is decent enough to warrant a repeat performance. I'll probably tweak some stuff, maybe take the last day off (and lend the table to my buds running a film and photography business, J Squared Studios -- there's a lot of interest in professional cosplay photography, and PopCon is good for cosplay). If I play it right I could get what I want out of the convention and not kill myself doing it.

Plus, a day off at the end? Who doesn't like that?