Well, This Wall is Over Three Feet Tall, So We're Gonna Have to Get a Permit...

Look, I wouldn't all myself a "social justice warrior" by any stretch. I do have opinions, and I am liberal leaning, but most of the time when I have an issue with something I just vote with my dollars instead of getting worked up about it in public settings. Money is more effective than all the tweets in the world. And yet, even for me (a lover of movies no matter how dumb they may be... and sometimes because of how dumb they may be), The Great Wall smacks of "White Savior: The Movie". 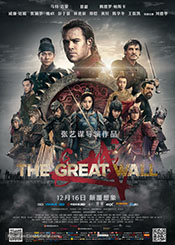 The plot essentially boils down to this: centuries ago in ancient China, and asteroid smashed down, unleashing hordes of evil space monsters than want nothing more than the consume everything in front of them and take over the world. Every 60 years, waves of these monsters spread across China. In response, over the course of 1700 years, the Chinese build the Great Wall to try and keep the beasts caged. The wall is armed by the Nameless Society (I think that was their name but they're nameless, so whatever), an army of skilled warriors whose only job is to keep the beasts out of lower China (they can have Mongolia for all the Chinese care, though).

Into that setting walks Matt Damon (sporting an atrocious accent) and Pedro "the Guy from Narcos" Pascal. These guys are Western soldiers that have come to the East to learn the secret of explosive black powder. However, they get caught up in the war with the aliens and, eventually, join in, eventually helping to save the day.

So let's unpack all that. Firstly, the aliens crashed down 1700 years before the time this movie takes place (our "present" is during the time of the Chinese dynasties). The aliens are a force to powerful for the Chinese to take out on the ground so they needed the wall. Except the aliens come back every 60 years and the wall took 1700 years to built (as per the movie's own opening story). So what did the Chinese do for those first (calculating...) 28 invasions? Were the aliens just really reasonable? Were they like, "hey, we see you have this wall. Don't worry, we won't just go around you and invade." That's never explained.

How about the two white dudes: what's their whole reason for being there? They say they're in it to learn the secret of black powder, but why? These gets are hired mercenaries that will work for anyone, soldiers without a flag. If they learn how to make black powder, what are they planning to do with it? Wage more effective wars for whoever pays? Are they doing it for a specific reason? If it's ever mentioned I can't remember it especially since they never discuss it again. 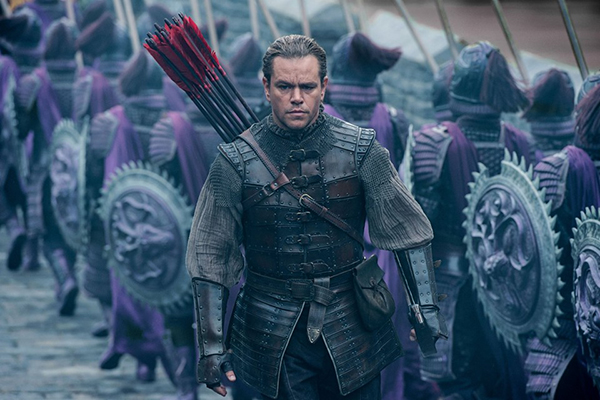 Then we get to the white savior part. The Chinese are super afraid of the aliens and need an army to defeat them. These two dudes, though, easily take one down at the start of the film and then, later, are shown time and again defeating these fell beasts with ease in comparison to the Chinese soldiers. What makes these guys so great at saving the day when all the Chinese soldiers have been training for this specific invasion for years? The day is only saved in the end, too, because Matt Damon was there to be Matt Damon. Without his specific help the entire country (and the world, presumably) would have been lost.

The weird thing is this is a Chinese co-production (Lionsgate East and China Film Group) so they clearly didn't have an issue with the insinuation of it. Maybe it's not a big deal over there it just seems so weird to me that with all the great Chinese heroes this movie puts forth, Matt Damon has to be the one to save the day. It's not even like it was a movie star who ostensibly kicks ass (a few Bourne movies notwithstanding). Had it been Keanu Reeves, for example (an actor who has shown a love and appreciation for Asian culture) it might not have seemed as weird (plus, Keanu is just really good in full-on action roles). I don't know that any white actor would have been better in this role from the white savior perspective, but Matt Damon was not the guy for it certainly.

If we can move past the plot (which, wow, in all aspects that's hard to do) it's at least easy to enjoy the movie as a big, dumb spectacle. The five armies that make up the Nameless Society of Namelessness as super pretty, each in their own colors that shine and glimmer in the sun. The action is well choreographed, well edited, and very cool to watch. It all has a wuxia vibe that I really dug, the kind of martial arts spectacle that works best on the big screen. I have absolutely no complaints about how the movie was filmed or made and I would watch the action sequences over and over again. They're fantastic.

But we can't really ignore the plot. It's dumb and goofy and makes no sense. There's just too many things that don't work in the story with enough plot holes that I couldn't shut my brain off. If you can manage to just watch it for the dumb movie it is, I invite you to give it a try (it really is pretty). I just couldn't enjoy the film anywhere near as much as I wanted to.