Please Stop Trying to Get Me to Watch Anime 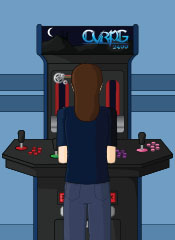 I dislike anime. I know a lot of you out there will be "but anime is many genres, not just one, and to say you don't like the whole of the animation style is small minded and obviously ignores all the various types of stories told by anime, and besides you just haven't watched the right one yet, so how about you try..." failing to realize I tuned out right around "but".

My blanket statement comes from many, many attempts to get into the genre. I have a found a few anime movies I was able to get into (Vampire Hunter D and Bloodlust, Martian Successor Nadesico, and RWBY being the only ones I can actually think of off the top of my head), but 99.9% of all anime out there is going to lose me less than five minutes in. Making me continue to watch it isn't helping anyone.

My issue with anime comes down to the way it's told. Most anime uses a very specific story-telling style and structure. The pacing doesn't suit my tastes (for a similar reason I have issues getting into 1970s American cinema -- it's too slow), and I just can't stand the story most every anime decides to tell. What story is that?

The reluctant hero gets thrust into an adventure he was neither expecting nor wanted, but due to the construction of the last 40 minutes (minimum) of plotting, our "hero" has to band together with a group of allies/new friends. He then learns the complex backstory of each person in his crew; from the overly macho beefcake to the girl with a chip on her shoulder and something to prove, the narcissistic pretty boy with dark intentions, the career-focused egotistical girl, and the two or three comic relief characters (who are almost invariably hyper-active twins).

The hero realizes he doesn't have the skill or power to be on the adventures he's on, and that all his companions are better suited to saving the day. Circumstances, though, will work out that our hero is the only man capable of saving the day, and he find his true power within. He then "powers up", defeats the giant WHATEVER that is threatening whogivesafuckvania, and saves the world. Then he goes off to live the quiet life (probably with the girl that hated him for half the movie before instantly discovering he was the love of her life all along).

I have yet to find an anime that doesn't check off most of the story elements I just listed. There are some that would consider most of the U.S. film output for the last few years trite and trope-riddled, but anime puts it to shame.

Beyond the story, though, I just can't stand the writing. Japanese-written dialogue clashes with the way I expect dialogue to sound (from years of watching U.S. cinema). And this isn't just because I watch it dubbed -- I've tried subtitles as well, and while I will agree the acting is better in many instances, it doesn't make the written dialogue any better. It's just polishing a turd, in my opinion.

I'm sure part of the issue is with translation, that the Japanese language doesn't translate to English easily, and some stuff is lost during the conversion. Still, even American-developed anime annoys me (for the same reason I've listed above). I tried to get into Avatar and couldn't get past the fact that the kid had a giant arrow on his head.

So please. Do not doubt that I've given it effort. I'm of a geeky-persuasion, so I know I "should" be into anime. For that reason I've given it more tries than I think I have to at this point. When anime comes up on conversation, I'm just going to sit quietly because I have nothing to add to the discussion (unless it's Vampire Hunter D, Bloodlust, Martian Successor Nadesico, or RWBY). If you ask me directly if I watch anime, I will tell you "no".

Just, please, whatever your inclination might be, don't tell me that I "just haven't watched the right one." Don't ask me to watch this film or that series. Stop trying to get me to watch anime. I'm just not interested.