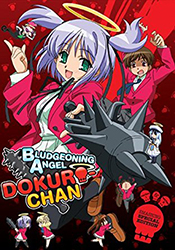 Dokuro Mitsukai, an elite angelic assassin, is sent into the past to kill the man who would accidentally accomplish immortality: Sakura Kusakabe. While immortality was not Sakura's actual goal, he still has slighted God, and God is very unforgiving.

Sakura's actual goal was to make women stop aging at age twelve -- thus Dokuro is tasked with killing a young Sakura. While in high school, Sakura seems like an average boy who does normal activities, and it seems unbelievable, to Dokuro, that he would be capable of creating a virtual pedophile utopia. Seeing Sakura's innocent behavior, Dokuro believes that she can prevent him from providing immortality to the world. Because of Dokuro's new found faith in Sakura, she believes he is completely incapable of creating such a device that would achieve immortality, Dokuro ultimately believes God is wrong and decides to spare and protect the life of young Sakura.

Living in Sakura's bedroom, Dokuro finds herself in many awkward situations with the young Sakura; and oftentimes ends up killing him with her giant club, named Excaliborg. Luckily for Sakura, Dokuro has the ability to resurrect him from the dead by saying an overly annoying chant, and making him appear unscathed.

Because Dokuro refused to obey a holy edict, heaven sent yet another assassin after Sakura, the polite and deadly Sabato Mihashigo. Sabato constantly tries to kill Sakura, but is always foiled by Dokuro and is sent running away after each battle -- often leaving a dead Sakura (usually killed by Dokuro)... who is later resurrected.

Bludgeoning Angel Dokuro-Chan (called Bokusatsu Tenshi Dokuro-chan in Japan) is hardly worth watching. While providing some humor, the series constantly falls short on an actual story line and hardly ever stays in continuity (especially between seasons one and two). The poor plot, coupled with the overly obnoxious "cute" voice acting, oftentimes makes this anime tedious to watch. The music is equally annoying, which makes the anime even more unwatchable -- exacerbated by the fact that they constantly repeat the same music over, and over, and over... and over again.

The animation is by far the best thing about Dokuro-Chan. The animation is crisp, fluid and colorful; and the character design is nothing but spectacular. The abundant amount of blood (unfortunately never spilled from the most annoying characters) along with the (slight) humor almost saves the anime from the overly-simplistic plot and dull characters... only almost, however. Dokuro-Chan is also full of gratuitous fan-service; there are a lot of "accidental" boob grabs, panty shots and pseudo nudity in this anime.

Not being a fan of fan-service anime and anime lacking a plot/story/character development, this was not my cup of tea at all. Although, if you enjoy fan-service and simplistic plot, then I would highly recommend at least one viewing of Dokuro-Chan. However, if you are looking for an anime with more than the bare minimum of anything, you'll be better served by another title.