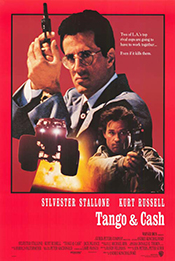 Ray Tango (Sylvester Stallone) is a straight-laced, well-dressed cop. He's been working to clean the streets of drugs, illegal weapons, and... well, just about anything else he can. Gabriel Cash (Kurt Russel) is also a great cop, although he's not nearly as straight-laced or well-dressed as Tango. The two have been doing such a good job at taking care of the criminal underworld that they've attracted the ire of the biggest, baddest underworld boss, Yves Perret (Jack Palance).

Perret, plainly, needs Tango & Cash out of the way, but he can't just kill them, as that would make the two hero cops into martyrs. No, instead he frames Tango & Cash for the murder of a federal agent. Now, stuck in prison and surrounded on all sides by the very criminals they've put away, Tango & Cash have to get out, get evidence, and get their names cleared.

Tango & Cash is the epitome of the big, dumb, '80s action movie. The heroes quip every second they can, leaping into big, dumb action set-pieces, and hardly suffer a scratch for all their mayhem. And really, that's the charm of the movie. It's not trying to be anything more than a fun piece of popcorn.

Credit should be given for the story, which is a little different from the norm. Most action flicks from the era are about vengeance over a lost loved one, or two cops hot on the trail of a crime syndicate, or the muscle-bound ape taking out a horde of terrorists in some god-forsaken third-world country. Here, the heroes are cast as the "bad guys" almost from the outset, and while, sure a little vengeance is on the agenda, priority number one is clearing their good names. It's at least a little bit of a change of pace in an over-saturated genre.

Sadly, the biggest downfall is that, two-thirds of the way into the movie, everything falls apart, right about the time the guys make it out of prison. It's here that obviously the writers ran out of ideas, realized they had to actually finish the movie, and threw every random scene they could together to string along the run-time and lead up to a random, over-the-top action sequence that feels so out of place in comparison to the rest of the movie, you have to check and make sure you're still watching the same flick. The big climax is more of a cartoon than a "realistic" action flick -- a poor cap to a relatively well put together movie.

The movie won't win any prizes for storytelling. That's okay though, as for the most part the movie plays along at a fun clip, and you can't help but get into the two characters. Stallone and Russell are plainly having fun chewing up every second of celluloid they can. They aren't really playing characters in this movie so much as just riffing on all these kinds of characters they'd played before. They're having fun, and they bring you into the fun as well.

They are, however, the only two decent actors in the movie -- and by decent I mean that they have the only good performances. Jack Pallance, as good of an actor as he is, delivers an over-the-top performance to make Christopher Walken proud (and Chris can give anyone a run for their money when it comes to over-the-top performances). He wasn't believable as a real person, let alone as the villain. He just walks around, lost in his own malevolent brilliance, once in a while saying something that remotely makes sense to the context of the scene.

A young Teri Hatcher is in the movie (as Tango's sister, Katherine) to provide the required eye candy, and to set up some conflict between Tango and Cash, but she spends most of the time giving a performance that hovers somewhere between terrible and simply flat.

Brion James is goon Requin (and why is it this man is forced to always play bad guys?). I've liked him in other movies, but here he has none of the subtle nuance he's been able to give in any other production. Plus, he has a terrible accent, which is supposed to be British but comes off as a pastiche of Brit, Aussie, and Horrendous.

The action in the movie is decent, but nothing we haven't seen before. Many of the scenes tend to go on much longer than they need to (like the aforementioned climax as well as a car chase early in the movie between Cash and a Chinese assassin). Worse are the action sequences that stretch believability (the worst being the opening scene between Tango and a gas tanker). When the director settles down and just lets the two actors fight their way out of a situation with their bare hands, the movie starts to gel. These are the best scenes in the movie, and make the movie worth watching.

Of course, that is up until that pesky last third of the movie when it all goes Loony Tunes.

As much as I rip into the movie, I do find myself wanting to watch it every once in a while. It's not at all good, but that's why it's the right kind of guilty pleasure when you just want to shut your brain off and enjoy a terrible, fun, action movie. If this sounds like your cuppa then go for it. You should know by now if you want to see the movie or not.