Movie Review: In the Name of the King, A Dungeon Siege Tale 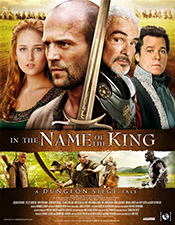 In the idyllic country of... wherever, a simple farmer (Jason Statham) farms his simple land, living a happy, simple life. He has an obnoxiously cute kid, a fairly attractive wife (Clair Forlani) and a friend who he's known all his life (Ron Perlman).

His simple life though, is ruined when Krugs -- ogre/goblin like beasts -- attack his town, kill his kid, and kidnap his wife. Now he has to venture off to save his wife, save the countryside and get back his simple life.

In the Name of the King is inspired by a video game called Dungeon Siege, and I will admit, I have never touched a Dungeon Siege game. I have no clue how close the plot of the movie this is to the games. However, a bit of research shows that, conceptually, the ideas are the same.

I have, though, suffered through a couple of this film's director's (Uwe Boll) previous efforts. Uwe Boll is notorious for directing some of the worst dregs of Hollywood, taking video game adaptation projects and directing them with little to no flair, getting the most wooden performances out of even the best of actors stupid enough to sign on to one of his projects. So, you can imagine the dread I felt going into this movie.

With that in mind, I have to admit that In the Name of the King is the best Uwe Boll movie I've ever seen, a dubious distinction that implies (rightly so) that the movie is barely passable, and not entirely unwatchable.

For starters, not a single actor in the movie seems to be able to act. Jason Statham, as Farmer, is passable, but he seems to have one emotion during the whole movie: gruff indifference. It makes the character hard to care about when he doesn't give you any insight into what is going on in his head.

Plus, his story just isn't that interesting: a child, of mysterious origins, grows up in a town on the outskirts of the countryside and is called upon to save the world. How many times has that story been done? We already know in the first 10 minutes that he'll have to fight every monster single-handedly. We already know he'll win. We already know he's destined for greatness. There's no character arc, just Statham going through the motions.

I am a fan of Statham though. He kicks some decent ass in many of the movies he's in. Here however, he seems out of place. He goes around fighting every monster like a 1970's thug. People come at him with swords, and he kicks and punches his way out of it like a boxer, not a knight or a peasant. Maybe it's nitpicking on my part, but every time he got into a battle I was pulled right out of the movie.

That is, when I wasn't pulled out by the truly terrible acting from every other performer. Ron Perlman (usually dependable) waffles between wooden and hammy. Leelee Sobieski (dug up for this movie from the deep pit her career fell into) seems like she pawned her acting ability to pay the bills and is now trying to relearn her craft. Matthew Lillard (why the hell does anyone employ him anymore) doesn't even look like he cares, he just goes around in a whiny haze over-acting every line as if it's his last (and Hollywood should make it so).

Interestingly, one bright spot in the movie was Burt Reynolds as the King. He actually gives a slow, nuanced performance, one where he plays the tension and stress of being a king right under the surface, letting his eyes do the acting. I was amazed he gave such a good performance, and wondered if he realized what movie he showed up for and just how bad the flick would be.

Really the entire cast, when you think of it, reads like a who's who of failed Hollywood careers, so at least we know how Boll is able to get people to be in his terrible films.

It isn't just the acting that's terrible. As I mentioned before, Jason Statham's fighting is out of place, but his odd, 70s thuggery is at least more bearable than the Krugs. These beasts are plainly men in ill-fitting costumes. They don't look like they can move very well, and are limited to simply jumping around menacingly. It reminded me of Power Rangers, when the Rangers would fight the Putties. That should not be the action style a director aspires towards.

The terrible Krugs are indicative of a greater problem with the movie: lack of a budget. Boll seems to have wanted an epic movie (and, for moments, he almost achieves it). Sadly for Boll, the studio that funded his cinematic turds has at least learned that Boll's movies won't earn anything, so giving him a real budget is futile.

I mention this because the biggest of the scenes are always filmed up close, in such a way as to mask the fact that the big armies that sometimes appear on the field of battle are really just 20 dudes or 10 Krugs yelling, with extra sound effects added in post. It makes the battles less epic and more... sad... and pathetic.

With all of that said and the awfulness pointed out, and the nits picked out for the world to see, I have to admit that I wasn't completely bored by the movie. At no point did I want to turn the movie off and never see another scene again. I could even see somewhere down the road if someone wanted to see it, I'd probably be willing to watch it again (if plenty of alcohol and pizza were included).

Which I think defines Uwe Boll's achievement: I didn't completely hate the movie. Boll, somehow, someway, has managed to improve. I can't recommend the movie to anyone, ever, but it is a noteworthy movie if only to showcase that Boll is not without some iota of talent.

I feel dirty admitting that.