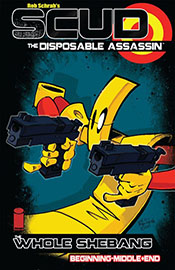 Opening in a world set after the Rapture -- it's a world not entirely unlike every futuristic society where corporations rule the world and humans are either sheep or wolves (think the Running Man, Robo-Cop, et all). One corporation, Scudco, makes disposable assassins -- robots, purchased from ordinary vending machines, that one programs to kill a target chosen by the purchaser. Upon completion of their assignment, the Scud (as they're called) then terminates itself; Thus, disposable.

(For those already freaked out by the Rapture, thinking this may be a "religious" book, it's not. Although Heaven and Hell do play into the book, it's in the most subversive way possible.)

Our hero, Scud 1373, is vended to annihilate a really odd looking creature -- who has a cow body, talking arms and legs, and a plug for a brain -- named Jeff. Jeff is wreaking havoc on a mannequin factory, and they want Scud to stop it. Scud however, figures out (in a bathroom mirror) that if he kills Jeff, he'll die as well. So instead of killing off Jeff, Scud shoots off Jeff's arms and legs, and then has Jeff put into a stasis tube at a hospital. However, because Jeff's medical bills are so high, and will die without medical treatment (which would then in turn cause Scud to die), Scud is forced to find a means of self-preservation, and becomes a freelance assassin, insuring his continued existence.

This odd premise makes for a strange, yet very fun, book. In many ways I kept reading Scud's adventures and thinking to myself, "this is a more over-the-top version of the Tick," which is a fairly accurate way of describing the book to new people. Scud's adventures get increasingly bizarre (and funny) as time goes on: leading him on a raid of a prison, an assignment to take out a giraffe with a satellite dish for a head, a trip to the moon to stop a werewolf who wants to become a black hole, and a jaunt through the Tough Man games to prove he's the toughest robot of them all.

And most of that happens in the first half of the series.

I will say that at first it was a slow read. Scud is an interesting character, but the adventures feel so remote from reality it tends to take a little time to get into them. That said, once the book gets going, it really picks up momentum. By the half-way point, I found myself not wanting to put the book down -- I had to know what happened. And a good part of that can be attributed to Drywall, Scud's eventual sidekick. Drywall is an interesting character all by himself, and discovering who he really is and what he was meant for (fate-wise) is one of the best reveals of the book.

Scud's design is great, allowing for an interesting, flexible character. I found myself fascinated at times by the actions Scud was doing on the page (he's just such a well realized design). Similarly, I really enjoyed the design of Drywall, who is as different from Scud as just about anyone in the book, but just as fascinating to look at.

That said, some may have issues with the art-style of the book. While Scud and Drywall are well realized, the rest of the characters, as interesting conceptually as they may be, just don't hold up. Most of the people on the page look more or less like everyone else on the page, muddling any scene where there are large groups of people. This problem also plagues the action sequences, as with so many indecipherable people it's hard to tell who Scud is fighting and how.

In many ways I think it's a flaw of how tightly the artist drew the pages (well, artists, as for a portion of the run a second artist was brought on, but he drew it just like the creator did, so it's almost impossible to tell the difference). Plainly, he wanted to get so much into so many panels that things get too focused, too tight on some actions without context for what's going on (not unlike many American kung-fu movies where the director pulls in so tight on the action you can't see all the cool moves being performed). It's not a book-breaking flaw, but it's just something that has to be accepted as you read.

But you will, because the story gets so good you have to know what happens, flaws and all. Scud is a great read, and once you settle down for the story, I argue you won't be disappointed by where it goes.