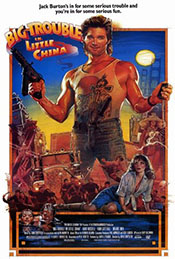 "This is Jack Burton in The Pork Chop Express, and I'm talkin' to whoever's listenin' out there..."

Jack Burton (Kurt Russell), a stereotype of the fearless American truck driver machismo, is driving his truck (known as The Pork Chop Express) and spewing self created, nonsensical, words of wisdom over his CB radio to anyone who is willing to listen.

Soon after his pseudo-sermon, Jack arrives at his destination: Chinatown, San Fransisco. Taking a break from living his life on the road, Jack entertains himself by playing a card game with some Chinese locals, and his friend Wang Chi (Dennis Dun). Winning, and earning a fairly large sum of money (especially from his friend Wang), Jack follows Wang to the San Fransisco airport to pick up Wang's fiancee, the green-eyed Miao Yin (Suzee Pai). While at the airport, waiting for Miao's flight to arrive, Jack begins flirting with a seemingly random girl at the airport: Gracie Law (Kim Cattrall). Trying his hardest to seduce Gracie (and failing miserably), Jack witnesses Miao being kidnapped by a local Chinatown gang. As they soon discover, the kidnapper is the "godfather" of Chinatown: David Lo Pan (James Hong).

Lo Pan, appearing as a frail old man, seems nothing but harmless -- but people are never as they seem. Lo Pan is actually a 2,000 year old sorcerer who is cursed to live in a frail body until he finds and marries a woman with green eyes, and then sacrifices her to the God of the East, Ching Dai (thus thankfully ending a marriage that would have just dragged that cool swinger down). Once the sacrifice takes place, Lo Pan will gain enough strength to rule the entire universe (offer void in Utah). With the help of Gracie Law and Egg Shen (Victor Wong) -- a Chinese sorcerer who also drives a tour bus -- Wang and Jack must travel through a realm of mysticism to save Miao and put an end to the evil Lo Pan.

Big Trouble in Little China is a cult-classic, cheesy movie that will not disappoint, so long as you're not looking for "high cinema". Kurt Russell, playing the most comical role of his career, is a joy to watch as a sort of John Wayne/old school cowboy hero. While he is selfish and crude, Jack's character seems to fit Russell perfectly; it was as if the role of Jack was specifically created with Russell in mind (and considering that fact that Russel also worked the director, John Carpenter, on The Thing and the Escape From... movies, that's not so outlandish an idea).

While the acting and dialogue as a whole is not great, (and sometimes downright ridiculous) the movie is still lovable in a way that is unique to this film. Where the actors really shine is in the film's many action sequences, which are bountiful throughout the entire movie. The fight scenes are fun, cheesy at times and quick paced -- always keeping the audience on the edge of their seats. The wire work is seamless and fluid, and sometimes believable (while other times purposefully not). There are a couple of fights however, that seem to drag on a little bit (especially the epic final showdown between Jack and Lo Pan), but that does not detract from the enjoyability of the movie overall.

Other than the great wire work, Big Trouble in Little China indulges the viewer with dozens of awe-inspiring special effects. The effects (especially the sorcery effects) were way ahead of their time when the movie first debuted in 1986, and a lot of the monster suits (and costumes) that were made looked fantastic and realistic. Coupled with the special effects, the background scenery and set design is also top notch, only adding to the "realism" of the film. From Lo Pan's mansion/warehouse to the monster infested underground of Chinatown, the scenes are flawless in design - but have the classic 1980's tackiness to a lot of it (there is a lot of neon used).

Although when Big Trouble in Little China was first released in theaters critics disparaged this movie mercilessly, this movie has been cherished and loved by many people, and proves that even critics can be wrong sometimes (or, at least, don't understand these kinds of movies at all). While this film is full of cheese, the characters are comical, lovable and downright fun to watch. If you have not seen this movie yet, or have not for a good long while, I highly suggest watching it. I truly hope you enjoy watching Jack's journey into Chinese mysticism and adventure. This movie isn't for everybody though. Although rare, some people can't get past the over the top dialogue and excessive fight scenes (like, for instance, the aforementioned critics). If spotted, these people should be publicly and mercilessly shunned.