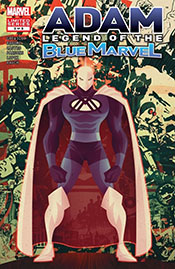 Anti-Man is a seemingly unstoppable villain, who hasn't been seen since the early 1960's. However, he then reappears in modern time and attacks New York City to create a self made utopia, and destroys anything that gets in his way ... including the Avengers. While fighting the Avengers, Anti-man mentions how not even the powerful Blue Marvel could defeat him; providing the Avengers the only clue in identifying the mysterious attacker. After easily defeating the entire Avengers lineup, Anti-man vanishes as soon as he appears, leaving a defeated Tony Stark (better known as Iron Man) and the rest of the Avengers questioning the attack.

Using state of the art 1960's computer programs, the government figures out that the Blue Marvel is Adam Brashear, a highly decorated soldier who received a handful of medals from the Korea War. The top brass also learns that Adam has a PhD in Theoretical Physics and was an All-American fullback. Adam was, without a doubt, the perfect American ... unfortunately, the White American public was not ready for an intelligent, dedicated black man to be running around with unchecked superpowers.

During a time when civil rights were unheard of, many white Americans (doing what white people do best) became fearful of a black man who was indestructible. While white America was terrified of the Blue Marvel, black America hated the fact the Blue Marvel refused to lead them in a race war; thus leaving poor Adam in the middle of a race conflict ... hated by both sides. The outrage in white America reached the highest levels of government, forcing President Kennedy to "request" the Blue Marvel to stop any super heroics.

Depressed, but patriotic to the point of "being a good soldier" the Blue Marvel retires from super heroics, never to be heard from again. The government, using their infinite media resources, claim that the Blue Marvel died while defending the planet, and no one questioned the story.

Thus ended the legacy of the Blue Marvel.

Writer Kevin Grevioux provides a great story in Adam: Legend of the Blue Marvel. Through his intelligent dialogue and master story telling, the reader feels nothing but sympathy for the Blue Marvel. Grevioux's tale shows, in a completely unique way, the powerful struggle of a black man who overcame unbeatable odds, and shows the reader that there is still some strain in race relations today.

The art, provided by Mat Broome and Roberto Castro, was simply breathtaking; able to mix the old-school Marvel Comics feel with a new twist. During the many flashback scenes, the art displayed has a retro feel which helps give the book much more depth. However, the art at times makes it difficult to tell characters apart (especially government big wigs), but it is not so bad that it detracts from the story.

Coupled with the stunning art of Mat Broome and Roberto Castro, Kevin Grevioux gives us a book that is hands down one of the better Marvel mini-series that has come out recently, and unfortunately was hidden under the radar. I highly recommend this book. It is a great story and has a powerful message behind it. I am excited to see another Blue Marvel mini-series (or better yet ... a series), and hope Grevioux delvers again.