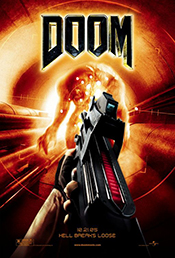 The UAC Space Marines are an elite group of battle-tested soldiers. We know this because they tell us this detail at least five times during the course of the movie: "They're the best. They're elite." They never actually show us any of these previous missions to let us know, from experience, how good they are, and if their performance during the movie is any indication, they aren't really that good (or everyone else is truly terrible by comparison).

After a distress call is sent out from the Mars Base (yes, Mars the planet), the Space Marines are dispatched to handle the problem. It seems some kind of alien (or something) has attacked the lab technicians at the base, and the station is now under quarantine. The soldiers have to get in, save the people, kill the monsters, and secure some important data.

Lead by the enigmatic Sarge (Dwayne "The Rock" Johnson), the "well trained" soldiers infiltrate the base, secure the scientists, and start to clear out the monsters. But will they be able to save the day and stop the alien menace?

Doom plays a lot like Aliens or Predator. It's, plainly, a movie in the same vein as these sci-fi monster movie classics. However, as much as it wants to be as good as these films, Doom never quite comes together into a cohesive whole.

For one, most of the cast is decidedly unmemorable, plainly included in the flick to up the body count (just like any dime-a-dozen slasher movie). You can tell, almost from the first scene those who will live and who will die -- the hero of the picture, John "Reaper" Grimm (Karl Urban), is dark and brooding, but you can tell he's the one guy that knows what he's doing. He has a dark past, and is trying to find his place in the world. He's also got the most backstory of any character; killing any suspense that he's going to save the day (few movies take the route of Feast and kill the hero in the first few seconds he's on screen just to prove a point).

There's a girl, the only one with any story. In a nice twist from movie conventions, she's not the love interest for the hero. Samantha Grimm (Rosamund Pike) is Reaper's sister, and she, too, has a dark backstory, but while Reaper broods a lot and runs around with guns, Samantha continued on the "light" path, following in her parents' footsteps.

Not that you'll really care about either of the characters. Neither Urban nor Pike really imbue their characters with real life, instead playing characters almost as flat as the cast of the Star Wars prequels. Truly the only person worth watching is The Rock, and he's not even the hero (although he makes every scene he's in interesting). The Rock actually gets a fair bit of depth for his role, being able to play both the heroic leader and the dark government lackey. Plainly, the Rock enjoyed his turn into darker territory, something he doesn't normally get to do as the action heroes (or family friendly types) he normally plays.

The Rock notwithstanding, the acting isn't the only terrible thing in the movie. As I highlighted before, the story isn't really much to speak of, just flat, easy-to-kill characters and a bland, simple to describe mission. There's little suspense at any point in the movie, mostly because you never care about anything going on onscreen. You know exactly what will happen before it does, and every twist and turn (save one) is telegraphed long before you get there.

Plus, the aliens/monsters are nothing to speak of. Consisting of what look like rubber-suit cast-offs from Aliens, the monsters come off as horribly cheesy... when you can actually see them. It seems like the budget was so low they couldn't afford good alien suits, so to make up for it they cast everything in dark light which makes it hard to see how bad the alien effects are. Of course, it also has the effect of making everything impossible to see for most of the movie.

Now, some would argue that Doom, the game, has plenty of dark hallways where you can't see what's going on. Having a movie mimic this, though, is silly. It works in the context of the game because you're in control. You have to decide when to use the flashlight and when to use the gun (never at the same time). You get a sense of adrenaline from it because you, the hero, never know what will come out next. Plus, you care about your own survival.

The nods to the games, though, for the most part don't work because you aren't in control. This is especially the case with the "First Person View" they do in the movie. Sure, it feels like you're watching a Doom game. First-person shooters are fun to play -- you get a sense of accomplishment from making it past a room and into the next one. They aren't fun to watch, though. You get no sense of fun from watching someone else fight off aliens... especially when that person is plainly going to win because he's the hero (again, telegraphing everything ahead of time).

Truly the movie is a mess. However, and I can't explain it, I did have fun watching the movie. Nothing in it was good, except for The Rock, and nothing worked... and yet I kinda liked it all the same. I don't think I'll watch the movie very often, but I'm not opposed to ever seeing it again. I guess that counts for something.