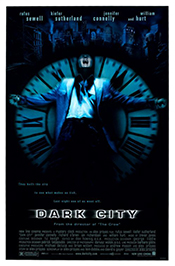 A man wakes up in a hotel bathroom he doesn't recognize, bleeding from his forehead and having no memory of who he is or what he's doing there. Exploring his room, he finds a suitcase full of stuff that may or may not be his... and a dead hooker on the floor. He gets a call from a doctor telling the man that there are people after him and he has to run.

This is how Dark City opens, leaving you in a world where you're not quite sure what is going on -- all that's clear is that the rules of the world (which looks somewhat like the 1950s bathed in eternal darkness) aren't exactly like the rules in our own.

Dark City is a bit of a mind trip. As the clues are slowly revealed about the world (and the puppet masters behind the scenes) new questions open; and not just about who our main character is, but about why he's so special and why he's the only one that can truly get to the heart of the mystery. This isn't a movie for people looking for a quick answer, and, in fact, it does take a couple of viewings to really "get" everything the movie is showing (sure, it's not as confusing as anything ever directed by David Lynch, but it's not simple popcorn either).

The movie is equal parts thriller and special effects thrill ride -- there's a lot of special effects going on throughout the film. One of the big things about the city in Dark City is that it's never quite the same from day to day (I don't want to ruin why, but believe me that things shift around). The transformation effects as the city shifts are quite good, although to be honest, they haven't aged as well as they could have. While it's not so bad that you're drawn out of the movie, there's a certain "pop-up book" style to it that's a little jarring. The current industry would do the city effects differently (what with computers being so much more powerful and being able to stretch a small budget so much farther), which is sad, because when the movie came out the effects were incredible. Now, they're just kinda "meh."

Thankfully the story still holds up, and this is as much of a credit to the writers as it is to the director, Alex Proyas. Proyas makes a taunt, nuanced movie, keeping the pacing up and secrets hidden and letting out little clues just when you're about to get frustrated. These kinds of movies can easily be hard to get into -- and admittedly, some don't like the film because it hides many of its secrets for as long as possible -- but the payoff for this movie is strong enough to carry the flick.

Much credit also has to be given the cast. Rufus Sewell, as our nameless hero (who eventually finds out his name may be -- yes, may be -- John Murdoch), pulls off an otherwise hard to perform role. He has to make us believe he has no clue what's going on, and yet make us care about a character that stumbles through much of the movie with a dumbfounded look on his face. We could easily stop caring about John, stop caring about why he's in his situation, because he's acting like a moron -- except Sewell's Murdoch isn't a moron. He's got a flash of intelligence, brains inside his head, and we can tell that he's constantly working out the solution to his problem, and would have it solved if only he had all the clues.

William Hurt as Inspector Frank Bumstead is one of the main foils in the movie. He's investigating the murders Murdoch has allegedly committed. But again, he also is investigating the mystery of what is happening (this part of the storyline is expanded enough in the Director's Cut that I suggest watching this version of the movie instead). Bumstead is compelling to watch because he has all this evidence pointing him in one direction, but we can tell he doesn't believe all of it and wants the real answers. Hurt brings us along for the investigation, and makes us care about his part of the story as well.

If there's a weak link in the cast, it would be Kiefer Sutherland as Dr. Daniel P. Schreber. While his storyline is important to the movie, the way Kiefer portrayed his character is just grating -- he always speaks in this breathy style, pausing between every couple of words to draw a breath in, almost like he's hyperventilating. His performance draws the viewer out of the movie, making you wish he'd just finish his freaking line already.

If there's any other major flaw with the movie, it would be the real villains (the aforementioned puppet masters). While their story and motivation are interesting on paper, these characters are never compelling to watch -- you just don't care if they win or lose at all. The best villains have a motivation you either hate, or (even better) halfway agree with. Here, these characters are just bland.

The mystery of Dark City is what really defines this movie and makes it watchable. Even after you already know what's going to happen, repeat viewings are still strong because you're trying to find all of the hints and clues to see how it comes together. It's a compelling ride that is worth taking again and again.