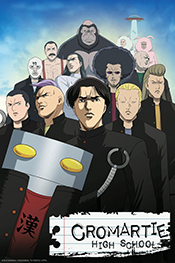 Because of a single bad choice, laid back and intelligent Kamiyama Takashi is forced to attend the high school for delinquents: Cromartie High. Cromartie is well known for the numerous amount of punks and gangs that attend its "hallowed" halls, and only the toughest of the tough can make it to graduation. Being flung into a scene he knows nothing about, Kamiyama is faced with the difficult task of adapting; through a series of trial and error (and a bogus "strong man" competition), Kamiyama somehow becomes the (gang) boss of his class and is forced to turn a group of social misfits into the strongest, toughest punks Japan has ever seen.

Kamiyama is not alone, however, joining him in his crusade are: Shinjiro Hayashida, the purple mohawk wearing best friend of Kamiyama; Shinichi Mechazawa, a tough (yet gentle) robot who believes he is a human student; Gorilla, an actual gorilla (who is said to be more intelligent that most of the other students) that somehow enrolled into the school; and Freddie, a silent, horseback riding, "teenager" who looks exactly like Queen front man Freddie Mercury.

While trying to provide some sort of harmony within the school, Kamiyama and company are threatened by gangs from other schools, airplane hijackers wearing luchador masks, and even aliens! Will this ragtag group of... mostly people... be able to unite the various school gangs and ensure harmony throughout the halls of Cromartie High School?

Does the plot make little to no since? If it did, forget everything that was previously stated. Cromartie High School's plot is completely random and, overall, has no overarching storyline. There is no "Point A to Point B," there is just good comedy.

Cromartie High School (known as Sakigake! Cromartie Koukou in Japan) is a parody of juvenile delinquent manga/anime which have remained popular to many fans of anime. Through twelve minute episodes, Cromartie tells completely random stories that barely connect together. By over-playing the moronic behavior of many of today's youth punks, Cromartie genuinely makes you sympathize, and laugh at, all of the characters in the anime. While making it crystal clear which groups they are trying to satire, Cromartie also provides a keen insight on the youth gang problem that the Japanese (as well as a lot of other places in the world) are currently having.

While Cromartie is light on plot it more than makes up for this by adding hysterical dialogue, perfectly timed repeat jokes, and sight gags. One such gag is the reoccurring appearance of television variety show host Pootan. Pootan and his friend (who is never named) tell overly dry jokes and anecdotes that are, in themselves, not very clever or humorous. However, because of the interaction and involvement of the other characters, Pootan and friend become one of the highlights of the entire series.

The music, while not outstanding, is catchy and neat; it is not anything special though. The opening theme song, "Innocent" (performed by Takuro Yoshida), is one of my favorite openings in any anime. If the creators of Cromartie had been able to keep that sort of feel, with the music, throughout the entire series the music would be much more enjoyable. As great as the opening theme is, the end credits theme does not fit with the anime at all, and does not lend itself to multiple viewings.

One nice thing about the DVD release is the cultural notes added in the special features section on each DVD. While not being Japanese, and never having visited Japan nor talked to many Japanese people, I do not know much about Japanese "inside" jokes and knowledge Japanese people would take for granted -- because of this, I would probably find myself not understanding some of the jokes and references. This is easily remedied by reading the quick synopsis and breakdowns of various culturally significant jokes and references. One does not have to be a "seasoned veteran" of the anime subculture to understand what is going on during the episodes, but having a minimal understanding of Japanese culture would greatly enhance the viewer's enjoyment ten-fold.

Easily one of the greatest comedy animes made, Cromartie High School provides the viewer an endless amount of laughs, and a frightfully fun mixture of idiosyncratic characters that will not bore. Cromartie High School is a must watch anime for anyone who would enjoy seeing a great comedy series, and anyone who enjoys anime. While watching this anime, just remember:

"The guys that appear in this anime are delinquents. Please do not, under any circumstances, imitate anything they do."