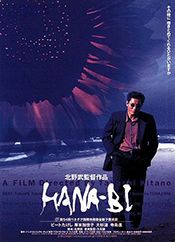 Fireworks (Hana-bi in it's native Japan) tells the story of Nishi (Takeshi "Beat" Kitano), a highly decorated, middle-aged police officer who rarely talks and is overwhelmed with guilt and remorse. Nishi recently lost a child and his wife, Miyuki (Kayoko Kishimoto), is dying of Leukemia.

The film begins with Nishi and his partner, Horibe (Ren Osugi), driving to a stakeout in hopes of catching a bloodthirsty murderer. While on the way to the stakeout, Horibe convinces Nishi to go visit his sick wife first while Horibe continues on. Reluctantly, Nishi makes his way to the hospital and, once there, learns from his wife's doctor that she does not have a chance to live, and it would be better for her if she were at home rather than a hospital.

While Nishi is at the hospital, Horibe is shot while covering his partner's stakeout shift. Luckily for him he survives the attack, but unfortunately he becomes bound to a wheelchair. To make matters worse, Horibe's wife and child leave him because, "They couldn't stand the sight of me," Horibe confesses to Nishi. This causes Horibe to dive into a deep depression, and does at one point in time try to commit suicide. "My mother tells me I need to take up a hobby," Horibe tells Nishi. Horibe continues, saying that painting was suggested to him and scoffs at the notion.

After Horibe's injury, and with his wife slowly dying, Nishi decides to retire from the police force to focus all of his attention on his ailing wife. Wanting to give back to the people he loves, Nishi is forced to do evil things for the greater good, including seedy dealings with the Yakuza (the Japanese mafia) -- which ends up with Nishi in debt to the mafia with little means to repay the debt.

Kitano, who not only starred in Fireworks, but also directed, wrote and edited the movie provides the viewer with a deep look into the soul of a man who would do anything for the people he loves. Kitano's character, Nishi, is nothing short of spectacular. Through Nishi, Kitano, who only has a handful of actual lines, is able to clearly convey his feelings to the viewer as if he were talking nonstop throughout the entire film. The movie often shows Nishi just standing, staring off into space with an expressionless face, but through the incredible acting of Kitano, the viewer understands exactly what is going through the mind of the troubled ex-police officer. Throughout the movie, you will find yourself constantly caring about a silent, expressionless man and his equally expressionless wife.

The cinematography is excellent; the colors used are light, giving the entire film an almost faraway and wistful feel. The dreaminess of the film changes drastically, however, when the scenes of violence occurs; these are filmed to look gritty and real, seeming much more lifelike than the rest of the movie. The story is constantly jumping from the past and present, sometimes making it a little hard to follow -- but the film does an excellent job explaining everything that is going on and why Nishi is making the choices he constantly makes.

Throughout the darkness and grit though, are moments of when paintings are popped into view. These vibrant and colorful pieces are a high contrast to the dark tones throughout the movie, but still fits in along with the dream-like setting. The paintings have a surreal feel to them, and aid immensely to the movie. It's the art that Horibe is shown painting (who originally scoffed at the idea, but does pick up this hobby), but in actuality they are original pieces of Kitano.

In 1994, Kitano was in a near fatal motorcycle accident that left some of his face permanently paralyzed. While recuperating, Kitano (as a form of therapy) painted dozens of paintings that are used throughout this movie. It can be said that Hana-bi is a direct fallout from Kitano's brush with death; and it is apparent that this movie was his way of telling the world the dual nature of humanity and the depression that tragedy causes.

Normally, music from film is rarely worth noting, but the music in Fireworks is so moving and beautiful that it needs special mention. All of the music in the film was composed by Joe Hisaishi, who gained popularity for composing the music in a number of Hayao Miyazaki films (Hayao Miyazaki being the creator of such films as Spirited Away and Howl's Moving Castle). The music brought the film to an entirely new level by adding more depth and sorrow into the film. It's uncommon to see music creating a tangible bond between itself and the characters (most of the time movie music is simply background noise) but in Fireworks, the music was its own character.

Fireworks, although sold in the United States as a violent bloodbath of action, is really an evolved love story that happens to have a lot of violent scenes and gun fights. Nishi's seemingly random violent outbursts are actually productive, and is a means to keep those dear to him safe. As the movie progresses, you begin to feel the selfless empathy Nishi feels for his friends and wife, and by the time the credits roll you will be left with a feeling of heartbreak and overwhelming sadness as you watch the final decision of the quiet, sorrowful Nishi.