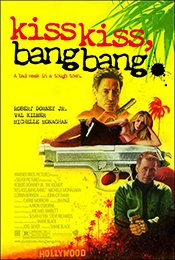 The movie begins as Harry Lockhart (Robert Downey Jr.) narrates a seemingly random story about two children who are performing a magic act. After using this scene to set the stage for the movie, unknowingly to the audience at the time, the movie quickly jumps to present day New York where Harry is a naďve, petty shoplifter by profession. After a botched robbery, and the untimely death of his partner, Harry begins fleeing from the New York police on foot and stumbles upon a movie audition. Not wanting to be caught by the police, he finds himself auditioning for the role where he impresses the entire audition staff.

Before he can even blink, Harry is on a plane to Hollywood where he will (hopefully) play a private detective in an upcoming Hollywood blockbuster. To properly learn how to be a detective, Harry is coached by professional (and sardonic) Hollywood private eye, Gay Perry (Val Kilmer).

While at a Hollywood party, Harry runs into his childhood friend, and high school crush, Harmony Lane (Michelle Monaghan), who has been doing bit parts in commercials. She tells Harry that her sister recently killed herself, but she suspects foul play. Wanting to impress the girl of his dreams, Harry lies to Harmony and tells her that he is an actual private investigator, and that he will take the case.

While shadowing Perry on the assignment, Harry mistakenly gets himself caught up in an epic murder mystery that is similar to detective stories from Harry and Harmony's childhood. With the body count multiplying, and no clear motive in sight, it's up to Harry, Perry, and Harmony to solve the classic question of "Who done it".

Written and directed by Shane Black (Lethal Weapon and Last Action Hero), Kiss Kiss Bang Bang employs a different type of narration style than movies I have seen in the past. Harry, through narrating, is telling the story to the audience, essentially breaking the fourth wall (which is rarely done in film -- another good example of this style of storytelling is Fight Club). The movie is set up as a classic film noir, but with overly quirky characters and humorous dialog; Kiss Kiss Bang Bang does not take itself as seriously as classic noir films, (such as The Maltese Falcon and The Glass Key) so the film purposefully ends up more tongue in cheek that its noir brethren.

The plot moves along quickly and the film rarely hits a dry spell; although there are one or two short, slow parts in the movie, they are barely even worth noting. Once a scene drags on a little while, the viewer is quickly rewarded with a scene that more than makes up for the seemingly lost time.

In order to fully appreciate this movie, you have to dedicate the 103 minutes to sit down and watch the film; if you miss even one tiny piece of dialogue, you may find yourself lost and confused. Every seemingly little plot point is part of the larger puzzle, and all of it connects perfectly at the end of the film. Sadly, although the story is fantastic, the overall plot does not seem believable, and some of the dialogue is (purposefully) over the top and seemingly, at times, forced. This minor gripe, however, does not detract from the movie being entertaining and genuinely fun to watch.

The acting is top notch. With Val Kilmer's portrayal of the sarcastic, homosexual private eye Gay Perry is both comical and entertaining, it is a pleasure to watch his interaction with the other characters in the film. While Val Kilmer certainly did a fantastic job, some of the credit also goes to Robert Downey Jr., who played Harry. The character of Harry is difficult to describe: he is stupid yet intelligent, dull yet interesting, and pitiful and admirable. Sometimes you love the character and other times you just want to strangle him. Robert Downey Jr., with his acting ability, provides viewers with a very interesting look into the spirit of Harry. The synergy between Robert Downey Jr. and Val Kilmer is awesome, and they really carry the entire movie.

Michelle Monaghan's portrayal as Harmony leaves a little to be desired. While her acting is decent, it seems that the character lacked personality, and remained simply uninteresting. Monaghan obviously tried her best with this dull character, but there was simply nothing to work with.

As far-fetched as the film is, the action scenes were brilliantly filmed and very believable. The fight scenes did not feel forced, as they do with a lot of movies in this genre, and played off the natural talents of all involved. One thing that I love about this movie is that the main characters get beaten up quite a bit; they are not super hero action stars, just normal guys trying to get a paycheck. This makes the film much more enjoyable, and adds a bit of realism to an otherwise implausible plot.

I would highly recommend this movie to anyone; it is fast paced, humorous, and down right fun. The acting, script and frequent action sequences keep the viewer on the edge of their seats, quickly trying to solve the mystery before the "big reveal"... which is highly unexpected, and impressive.