Article by Nathan A. Thompson 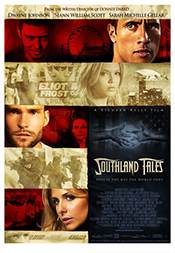 As I understand it, Kelly's original story was a black humor lampoon of Hollywood and American pop culture. He probably has a decent take on the topic having been thrust from obscurity to indie prominence thanks to the cult success of his first film, Donnie Darko. After September 11, Kelly decides that maybe he has something to say about terrorism, totalitarianism, racism, soldiers with PTSD and government control. He thinks he'll tell a story about where the world could be headed; and while he's at it he may as well throw in some time travel, perpetual motion, cloning and other various sci-fi elements.

If it seems a little much, that's because it is. This film is all over the place. The story cannon has been loaded with scattershot and fired randomly into the socio-political consciousness of America. Wet lumpy idea hunks and a detritus of fear and confusion are blasted all over our nice clean walls. The audience is left to clean up the mess and play forensic scientist as we try to scoop the pieces together and reverse engineer some kind of coherence from this 5,000 piece brain matter puzzle. Does anybody have any edge pieces?

"Scientists are saying the future is going to be far more futuristic than they originally predicted."

As far as plot goes, your guess is as good as mine. I won't even attempt to summarize it. After the movie was over, I turned to my wife and said, "I have no idea what we just watched here, but I think I kinda liked it." Believe it or not, that is an endorsement, at least the best one I can give, for watching the movie.

At 145 minutes, it feels at least twice that long with its giant ensemble cast. Their sub-plots pop up whack-a-mole style, just long enough to taunt you before burrowing back into the machine, never to be heard from again.

Ladies and gentlemen, the party is over. Have a nice apocalypse.

Dwayne "The Rock" Johnson is the lead as Boxer Santaros, an amnesiac action film star married into a powerful political family. He's researching a film or something. He's also the target of an obsessed fan that can track him down via her job at a US Ident, a government agency like Homeland Security on meth but dipped in clinical whiteness and bleached clean. Because, you know, it's for our own good.

Justin Timberlake plays Private Pilot Abilene, a messed up war veteran/drug fueled prophet who narrates the film and warns of a coming apocalypse. He also has a dance number that comes out of nowhere and is enjoyable as hell.

Without going into everyone, just about everyone is in this damn thing: Kevin Smith, Sean William "Stifler" Scott, Christopher Lambert, John Larroquette, and Mandy Moore. There's a virtual Saturday Night Live reunion with Nora Dunn, Jon Lovitz, Cheri Oteri and Amy Pohler. You'll see several character actors with recognizable faces and unmemorable names. "Hey isn't that Booger from Revenge of the Nerds?!" Yup, Curtis Armstrong. "Look, it's the, 'Inconceivable' dude from Princess Bride." Wallace Shawn. Holmes Osborne, Donnie Darko's Dad and perennial TV movie president plays an uptight Republican Senator in what I'm sure was a stretch for him.

If we could turn actor identification from this movie into some kind of underground drinking game, America's frat boy problem would have its solution.

All these actors do a decent enough job. Especially since the special features and interviews make abundantly clear that not one of them had any idea what the overall film actually was. They all came away from reading the script the same way I felt about the movie. It seemed entertaining. It seemed like it said something. But the how and why are just outside the reach of a tangible explanation.

I don't know what it means, but I'd like to have it on a t-shirt.

This movie isn't for everyone. When I think too hard about it, my head hurts. Those I recommend it to seem to either want to punch me in the face, or actually enjoy the recommendation. Right now I'm averaging about 50/50. I see both sides, and they're both right.

If you take a chance on this one, remember you got on the trolley in a strange part of town and you disembark in a part even stranger still. So don't come crying to me about your shattered world view and missing wallet. I told you it would happen.