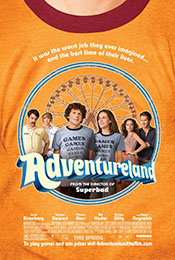 It's college graduation, 1987. James Brennan (Jesse Eisenberg) has it all worked out. He'll go to Europe with his buddy, Eric (Michael Zegen), travel the world, and then come back home, go to Columbia where he'll get his masters in journalism, and become a writer of "real things." The summer, however, takes an unexpected turn when James discovers that his father has been demoted, and his family can't afford to send James to Europe... or college for that matter.

The solution, much as it sucks, is for James to take a crappy summer job... at Adventureland, a local amusement park. While the job is less than stellar, and James wishes he didn't have to work there, the people he meets there help to define his summer.

I'll start this off by saying I really liked the movie. It isn't exactly a "coming of age" film or a simple "boy meets girl" flick, although there is a certain amount of meandering around those familiar story devices. The main thrust of the movie is about James meeting a girl he likes, Emily (Kristen Stewart), and the two of them orbiting around each other for a summer. While the two of them like each other, it's not exactly love at first sight.

Maybe I'm over complicating this in trying to describe the story, but that's part of why I like the movie (and why, I have to admit, it could frustrate others). It's not a quick paced movie, instead taking its time to get the two lovers together. It also gives time and weight to the scenes describing what happens when dramatic tension is thrown in. The climactic moments aren't bombastic, instead being slow and controlled, much like the rest of the movie.

Part of the flaw with the movie is whether you'll feel it's anything special. Sure, two kids falling in love on the silver screen has been done before. Usually it's a whirlwind romance, not over the course of an entire summer, which was a refreshing change of pace. You do get a sense of chemistry from the two leads, which makes watching the two of them fall in love easier to watch. Nothing ruins a movie like two leads that are "supposed" to be in love but don't have any chemistry.

Adventureland is billed as a comedy, but it's not a laugh-out-loud all-the-time comedy. It's... well, it's a dramedy. The funny is there, but it's subtle (again with that word), and accents the drama. I did find myself chuckling quite a few times, but not as much as I was expecting going in.

And that's okay. I've seen enough movies where the trailer made them out to be something they weren't. Sometimes they were less enjoyable because the trailer made it out to be something different, and sometimes they were just bad. I appreciated that I was able to go in and, even though the movie wasn't what I was expecting, the performances and the script felt real enough that I wasn't disappointed.

Taking a minute to touch upon that, the performances are across-the-board good, with only a couple of minor exceptions. Jesse plays James in a sort of awkward, Woody Allen-esque way, all awkward mumbling and not quite sure what the right things to say really is. He is able to make James out to be something more than the nerdy caricature he could have been.

Emily (played by that Twilight chick) is an emotional mess, but you're convinced of her messiness. You don't hate her for her actions during the course of the movie (and she does a few things to screw up the budding relationship), and that's a testament to the strong performance Kristen Stewart gives. You feel bad for her when the relationship takes a downturn, and proud of her when she works to get her life on track.

Special mention should be made of Martin Starr, who plays Joel. Again, this character could have been silly, a big, brainy nerd, but Starr sells the character, lending his loser dramatic weight. I found myself compelled by the scenes he was in.

Two characters, though, were less than ideal. James's childhood friend, Tommy Frigo (Matt Bush), is needlessly stupid, having some of the more awkward moments in the movie (although the most awkward certainly belongs to the Rush fan -- trust me). In the end, his character is redeemed a bit by helping out his buddy, but I found myself wishing that most of his scenes were simply excised from the movie.

Ryan Reynolds, as the park technician Mike Connell, is the other surprising weak link. This is a more dramatic role for Reynolds, and he felt awkward in the serious moments where he wasn't able to mug for the camera. Comedy is hard to do, and most comedic actors can pull off drama, which seems to be easier for them. In Ryan's case, I think he just needs more practice.

The only other big problem I had with the movie, if it can be called a problem, is that while they set the movie in the '80s, I wasn't so sure it really needed to be a "period" piece. To me, being in the '80s didn't seem to add much of anything to the flick, and really, the nods to the 80s they put in pulled me out of the movie more than they added to the scenes at all.

Minor gripes aside, though, I really did enjoy the movie. It's a good flick with heart, which will be hard to find once the Summer Blockbuster Season kicks off.