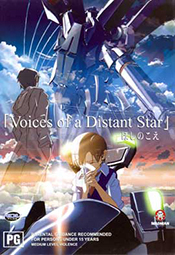 Voices of a Distant Star tells the story of two young lovers, Noboru Terao and Mikako Nagamine, in a futuristic setting. Noboru and Mikako share their lives with each other as young lovers do; eating ice cream, going to school and walking home together, talking about dreams and aspirations; all that comes with a budding relationship. But in one split second, that is all changed when an intergalactic disaster rips those dreams apart.

Now Noboru and Mikako must face the harsh reality of being separated. A mysterious alien race ambushes an expedition team on Mars and the United Nations puts together a legion to hunt down this alien race. Among the soldiers is Mikako. Off into the space war Mikako goes, and with cell phone text messaging as the only way of communicating with Noboru, the time difference and distance between Earth and deep space begins to take its toll on the literally star-crossed lovers.

Talk about a long distance relationship! As Mikako goes further and further into space, the longer the time it takes for the text messages to reach Noboru. By the end of the film, it takes a message eight years, 224 days, and eighteen hours to reach earth. Anyone that has ever endured through a long distance relationship or the feeling of utter loneliness will be able to relate to every emotion portrayed in the film. In one of the most sobering, weighted scenes in the movie is when Mikako sits in her armored mecha, alone in the deafening silence that is space, watching a sun fade away, Mikako begins to cry as the gravity of the whole situation hits her. She frantically types a message to Noboru, and then waits for the text message to complete its 8 year journey.

The simplistic honesty and the clarity of every sentiment in the film is bitter-sweet, a masterful creation on the part of Makoto Shinkai. He created, directed, and animated the entire anime himself on a Macintosh G4/400 computer, only adding to the astounding level of achievement. Shinkai was also able to show his amazing attention to detail. While the characters themselves are a bit uninspired, his backgrounds have very few rivals.

His use of dialogue is also something to note. Too often it seems like an anime series talks just to fill in time, and so instead of character depth you end up with basically white noise. Shinkai meticulously restrains the use of dialog, and every word is meaningful.

Voices of a Distant Star is a wonderful film. Shinkai was able to tell a story with more depth and meaning than most series can in hundreds of episodes. The anime, in my humble opinion, would have no trouble at all reaching to the hearts of even the most hardened souls.