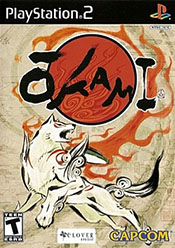 The forces of dark are beginning to close their malicious mitts over the glorious, prosperous land of Nippon. Only the wolf god Amaretsu, the reincarnation of an old god from legend, can save the once flourishing land.

As Amaretsu, you will meet a delightful array of stunning (and sometimes downright annoying) characters while utilizing unique (and honestly brilliant) control methods of game play. When you first load the game, you will undoubtedly notice the beautiful scrolls that act as the games main menu; this menu foreshadows what you will encounter during the rest of the game.

When you first start the game, you are told the lengthy, fascinating history of a legendary swordsman named Nagi and his quest to kill the dreaded Orochi. A white wolf, named Shiranui accompanies Nagi to defeat the eight heads of Orochi. They fail miserably at defeating him, but are fortunate enough to seal him away. A hundred years later -- Susano, a relative of Nagi, accidentally frees Orochi from his prison, bringing a seemingly endless reign of darkness over the peaceful Nippon. The villagers are desperate, and the elder summons the majestic Amaretsu, the reincarnation of Shiranui and the Japanese goddess of the sun. Amaretsu agrees to rid the world of darkness, and the adventure begins.

Okami's art is highly influenced by Japanese watercolor paintings; when playing the game, it is very easy for the gamer to get lost in the seemingly endless beauty of Nippon. To make this game feel more like a painting rather than a video game, you are given a celestial brush, which enables you to mimic the powers of the thirteen Celestial Brush Gods. Each brush stroke does something different to change the game play. The brush strokes can make the sun rise, or even kill an enemy. There is almost no limit to the power that the brush yields.

Okami's story and game play flow like one of the many majestic rivers you see in Nippon. While controlling the great Amaretsu, you will have absolutely no problem adjusting to the games controls. They are simply astounding. The camera is always in a perfect spot, the control is flawless and the visuals are again ... too beautiful for words. As you travel through ancient Nippon, you are on a quest to find the thirteen Celestial Brush techniques, which will hopefully enable you to end the terror of Orochi. The control of the brushes are a lot easier than I first thought they would be. You barely need a tutorial to learn how to use them; its very easy to maneuver and quick to pick up. While Amaretsu ventures forth and defeats enemies, she (that's right, I am fairly convinced that ol' Amaretsu is a female) will acquire Praise Orbs, which are used to make her much more powerful; and yen, which is used to buy special items from NPC's in the game.

As you move through the game, you will notice the beautiful score accompanying the game play. The music is mostly (from what I can tell) classical Japanese music. The sound effects are equally stunning. If you can beat the game, you can even unlock a jukebox of sorts, which allows you to listen to the masterful music. The music adds even more mysticism to the game play; seemingly enchanting you to continue playing ... even if you want, or need, to stop.

Although the game is clearly beautiful, that does not mean it is without flaw. The game play gets very repetitive. Go to a village, talk to people with green arrows over their head. Rinse. Repeat. Although the story was fun, sometimes it seems to drag its feet. And honestly, how often do gamers run into games with this basic story: run around collecting X amount of magical items so that you can defeat the big boss (Hmm ... that sounds kind of like a popular Nintendo game...called Zel-something, can't really put my finger on the title...)? When you think you're ready to go back out and explore the world, you have to do some lame quest to find out information. Fortunately, most of these tasks are really simple and don't eat up too much of your time.

It can also get a bit confusing when you have to use the brush strokes to advance the game. Usually it's obvious, but I had to scratch my head once or twice to figure out the 'puzzle'.

This game, even with the down time, is amazing. Every single person should play this work of art. Unfortunately, however, this game (despite its good reviews) did not sell very many units in the United States. Because of poor sales, Clover Studios (who also gave us the Viewtiful Joe series) closed its doors; so there is probably not going to be a sequel to Okami ... or even a game that is comparable to Okami. Fortunately most of the members of Clover Studios have moved on to PlatinumGames, which will be releasing Bayonetta (a game about a witch with guns for hands and feet) that will be released on the 360 and PS3 and Madworld which will be released on the Nintendo Wii.

As you play Okami, you will experience many different emotions. You'll laugh. You'll cry. You will get so wrapped up in the game that you will forget to eat, sleep and shower. Please, for the love of all that is beautiful (...like Okami), don't forget to shower.