Game Review: Archon, The Light and the Dark 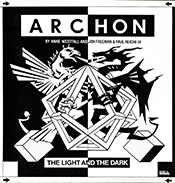 Gamers, who know any Greek, would probably know that archon means "ruler" or "king". Hmmm... I personally like to pretend I'm a king, and this game would probably allow me to do just that. I finally (aside from the countless other games that allow me to do that... like Civilization) have the capability to be a ruler of a civilization! So, not really knowing what to expect (but expecting a Civilization-like game), I shelled out the $3 for this game and went on my way. When I arrived home, I popped this bad boy in my NES, pushed the power button, and was sucked into a spiral of confusion. You start the game by choosing to play as the light side, or the dark side. After picking your side, you see what appears to be a chess board lined up with fantasy creatures on either side.

Great: I bought another chess rip-off.

The main object of the game is to capture all five of the power squares by sending your creatures/soldiers to them (these squares are outlined on the game board), or defeat all of your opponents in combat. Sounds easy, right? Wrong. This game has a couple of unique and interesting features which I find both annoying and amazing. The power of the light and dark sides fluctuates depending on the zenith of the army. Sometimes the light side will be weak and feeble, other times it is a force to be reckoned with! It all depends on what square you are currently standing on. Some of you may be asking, "Why does strength matter? Isn't this a simple chess rip-off?" I, too at first glance, thought Archon would be a blatant rip-off of the classic strategy game. This game throws a curve ball by not using ANY of the chess mechanics. Not only can all of your pieces move in any direction; but when one of your pieces lands on an enemy's piece, you are taken to a field where the two fight each other to the death!

That's right. This is part board game and part action game! Who would have thought this was possible?!

Unfortunately, the controls are very difficult during this aspect of the game. I've had problems where my soldiers get stuck in the terrain, or where their long ranged attacks don't register as hits (even though it unmistakeably hit the target).

You can even get a double kill (where both you and the computer's piece die in a highly anticipated "unicorn versus dragon" death battle), which makes the game that much more interesting (and frustrating). The game features several different types of characters to control (sixteen in total); and each of these archetypes have different life spans and powers. Some of the pieces can fly or teleport, allowing them to essentially jump over pieces while others have special attacks that are unique only to their class. Both the light and dark sides get a spell caster: the light side gets a wizard, while the dark side gets a sorceress (both of these pieces are easily the most powerful figures in the game, on the board and on the glorious field of battle). On the game board the magic users can cast an array of powerful spells (they can heal, imprison opposing creatures, or summon elementals to attack other creatures). In battle mode they are great, very fast moving, and can utilize ranged combat.

If you take the age of the game into consideration, the graphics are great. You can easily tell what you're playing. A knight looks like a knight, a wizard like a wizard, and a unicorn like a unicorn. The only time the graphics get confusing is when you're on the actual board screen. Some of the pieces look near identical (the knights and the archers for example). In the end, however, the game's graphics were very crisp and easy to make out. Archon is right on par with other NES games from the late 1980's; nothing that stands out to much from the norm. The sound effects are decent -- nothing really special. At first, this game doesn't make much sense at all. However, once you figure out which squares give your pieces a bonus, and what pieces are more powerful, the game play begins to get a lot less tedious and a lot more fun.

If you enjoy strategy games, or even if you enjoy fighting/action games, I highly recommend this. This game has a low-medium to medium replay value, and after you pick up the quirky game mechanics the real fun will soon follow. Venture forth, valiant ruler and slay the hordes of enemies that wish to... well, I'm not really sure what they're fighting for... but I'm sure it's very important.