Movie Review: Sky Captain and the World of Tomorrow 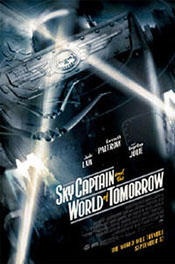 The world is threatened by a... threat of... threatening proportions... Let me try that again.

The Earth, specifically New York City, is attacked by what appears to be space aliens. The U.S. military sends its best man (along with a whole lot of cannon fodder), the Sky Captain (Jude Law) -- a hero that can stop any threat the country has seen by flying around, menacingly, in a very small plane.

So, okay, no one said it was a good plan.

The aliens aren't the only issue. The death of a scientist leads the Sky Captain and his new, attractive, blond friend (played by Gwyneth Paltrow) on the hunt to solve why the scientist was killed, and how it ties in to the alien attacks...

Honestly, the weakest part of this movie is the script. You really have to review the writing and the visuals separately, because just on the visuals alone, the movie is a treat.

There are a lot of little flaws in the script that hold this movie back. For starters, why is the Sky Captain our big hero? I mean, yeah, he can fly a plane pretty good, but there has to be more than one person that can fly a plane (hopefully the Air Force is able to crank out a few hundred or thousand of them on a regular basis). We don't get a lot of background detailing his previous exploits, just that he seems to have had a slew of Indiana Jones-style adventures (which, if he's tracking, this movie can be added to that list).

He also has a few gadgets he uses to aid in his quest, but it's not as though those are all that impressive (within the context of the movie), or that they were government issued specifically to him to aid in his manly things. Everyone in the world seems to have access to technology previously unrecorded in the 1930s, which takes a lot of the fun out of the outlandish devices and effects that would, otherwise, have seemed inventive and over-the-top.

There's a villain, who we don't see for a good 90% of the movie, nor do we really know much about how the world is going to end for the prime majority of the movie. As we learn, over time, there are evil robots sent out to gather parts for a Doomsday Device, but since they gather and then run away, we can't really be menaced too much by them.

Truth be told, we aren't menaced by a lot in the movie. Our heroes seem virtually untouchable, not due to luck or skill (which Indy always seemed to have plenty of both), but just because no one ever really does anything to hurt them. There is a definite lack of suspense in this movie -- which is particularly bad, as I'm pretty darn certain this was supposed to be an action flick.

On the flip, the visuals are fantastic. Not unlike 300 (although this movie pioneered the style), the entire production was filmed on green screens, meaning that almost all of it, barring the actors, was created in a computer. However they were able to manage it, it worked, because there are few moments that look bad. I hardly ever said to myself, "jeez, that looked so fake."

Even then, though, there's a certain sheen and plastic-ness that they applied to everything in the movie (a kind of glossy filming style), that tends to make everything look just a little fake. Once you get used to it, you stop noticing it, but I will concede that, when you first start the movie, it can be a little off-putting.

It's certainly not a great movie. You won't be engaged by the plot, certainly (even the best bits aren't anything Indiana Jones hasn't done -- done better, too), and anything really revolutionary about the movie has been blown apart by later movies that have used the green-screen style to even better effect. The best that can be said is you'll probably enjoy it once, just for the visuals, but I don't see many (or any) re-watching in the future.