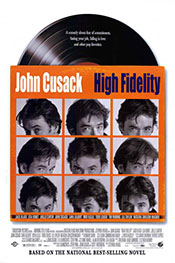 This is one of those movies that, not being a major blockbuster, I passed on while it was in theaters -- oh so long ago -- preferring to wait until it came out on video (ah, the days of yore, where movie came on magnetic tape...). I'm only lamenting because I prefer to see every movie that makes my "Top 5 best movies ever" list in the theater... This one was a dark horse that came out of nowhere and charged onto my Top 5.

And that should show you where this review is going. I love this film.

Rob, our protagonist, owns a record store; but honestly, he is the proud owner of an obsession with records. This addiction dominates every aspect of his life, coloring all his interactions, choices, and influencing the way he views love, which is the true focus of this movie. We follow Rob on his journey as he tries to put his life back together after his most recent break-up.

The plot is both wonderful and insightful; Rob's decisions, based on his observations about relationships in general, feel both real and moving. This helps in getting through what can be, at times, a hard movie to watch -- but not hard in an "oh god, this movie is awful," kind of way. This is about break-ups as well as rebuilding relationships. Watching two people have awkward (honest) scenes as they fall out of love can be hard to watch, but that doesn't stop them from being powerful moments.

John Cusack, who plays Rob, was made to perform a role like this. The character is insecure, broody, and angsty... basically everything John has built a successful career out of playing. The other characters provide subtle variations, showing the many different ways that humans can be obsessive and crazy -- although, really Jack Black isn't all that nuanced in his performance as an over-the-top crazy guy (well, to be fair, maybe that is him being nuanced). The writing and comedy play well with the actors' portrayal, providing a balance that is exactly the right amount of truth, poignancy, and entertainment.

And yes, this is certainly an entertaining movie. Not all the scenes are easy to watch (especially if they remind you of any times in your own past relationships), but the movie is not without it's less awkward, more entertaining aspects; the funny moments are truly funny and the sweet moments are movingly sweet. The discussions about music are deep and insightful (hell, you'll probably come away knowing a fair bit more about music than you did going in, or at least three new ways to organize your record collection).

The writing is so rich, so well done that you're hooked from the beginning, joining Rob as he rides out this dark time in hislife, figuring out just what he wants from life -- and love. That is the great strength of the film.

As you can expect, I highly recommend you give High Fidelity a watch - I'm sure you will enjoy it.