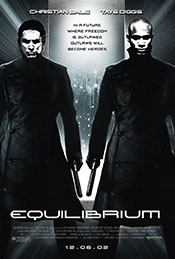 Equilibrium is the story of a future where emotions are outlawed. Emotions, especially the "bad" ones like hate, greed, and... uhm... other bad emotions... eventually lead mankind down the path towards war -- or, as Yoda would say, the Dark Side.

For the betterment of mankind, emotions are removed from the majority of the human race through the use of a drug: Prozium. Taken three times daily (ask your doctor if Prozium is right for you), the drug removes all emotions (including more implied senses like how sheets feel, or the cool, interesting sensations from a metal hand-rail).

Of course, if that was all of the movie, it would be a fairly boring movie (maybe something from Russia, circa the 1950s). Some people don't take their government mandated drugs, instead choosing the feel, to enjoy artwork, to love. These people have to be stopped (because they could lead to the Dark Side), and this is where the law enforcement of this emotionless police state come in.

They are the Clerics, and they will stamp out all feelings the government deems illegal.

That's the setup, anyway. Christian Bale is one of these Clerics, and he's one of the best (if not the best) at what he does; but what happens when he starts to feel? Will he remain a Cleric, or will he join the ever growing resistance?

Okay, so I'm sure you can already see where this plot is going long before the movie ever gets there; it really is not a movie that's rejoiced for its fine writing (really, to be fair, it's not a movie that's rejoiced at all). Personally, I don't find it to be too terrible a flick, enjoyable in parts, but then, I do have a love of really terrible flicks, so maybe my opinion doesn't count for so much at all.

The best part of the movie is certainly Christian Bale. He delivers an appropriately reserved performance, controlled and severe -- it was this performance that made me think he could be Batman (although his Batman doesn't share much with this character here, but that's neither here nor there). Watching him as he slowly gains emotions and tries to figure out how to deal with them is truly the best part of the movie ... certainly the action isn't a high point.

This is an action movie, make no mistake, but the action is... well it's not uninspired, it's just listlessly filmed. The gimmick of the movie was "Gun-Kata", a weird amalgamation of kung-fu and gun play. It's as silly to watch as it is to hear about. Other bits (that don't involve dudes posing all manly with guns) are just plain tedious. There's a sword fight late in the movie that looked like it could have been awesome, but ends up over before it even starts.

So really, you don't go into this flick for the writing, or the action. It's all about Christian Bale and how he's able to elevate a rather horrendous movie to not-so-awful levels of watchability.