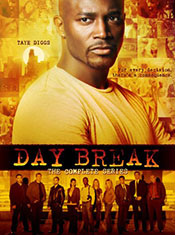 Detective Brett Hooper has a problem. He thought his day was going to be fine. He woke up in bed with his hot girlfriend, grabbed a cup of coffee, saved a woman's life, and headed home to let out his dog. It was here, however, that he was arrested for the the murder of District Attorney Garza. The police find the gun that killed Garza at Detective Hooper's apartment and there's a witness that ties Hooper to the scene. But Hooper is innocent.

This, however, isn't his problem. Hooper's problem is that he is experiencing this one very bad day over and over. Each morning he wakes up in bed with his girlfriend, and he has to try to figure out who framed him, why the police are after him, and what he can do to stop his day from repeating.

Day Break takes the Groundhog Day concept (a man reliving the same day over and over and he's the only one to know it) and makes a series out of it. The first season (and sadly the only season), follows this one day as Hooper tries to solve the murder investigation and free himself from the police. Although they don't state that his goal is to save the day and clear his name, it's blatantly apparent that it's the arc of the season, and the fact that his freedom from the day ties to this case should come as no surprise to anyone (it's the one "twist" that's telegraphed).

Day Break does have a few surprises. For one, if Hooper does something important enough on a previous "day", it can cause shifts and changes in the people around him -- and not always to his benefit. Additionally, unlike in Groundhog Day, if Hooper gets hurt, he remains hurt until he heals up naturally (he does manage to get shot during the season, and that has some interesting repercussions on the next go-round).

Much of the suspense and drama of the show is derived from the relatively simple concept of seeing a man repeat the same day over and over. As tedious as it sounds on paper, the show never stops being engaging -- of course, it doesn't hurt that the cast of the show is (was, since the show is over) fantastic.

Taye Diggs does a great job, having a strong on-screen presence. He's an actor that some might think "oh, he's just pretty... it's not as though he can act," but that's simply not the case. He's able to draw you, as the viewer, into what he feels -- the frustration, the anger, the need to fix what's going on. Sure, the fact that he's pretty means that girls will willingly watch the show, but his acting is what keeps you watching.

Adam Baldwin is Hooper's old partner (and Internal Affairs flunky) Chad Shelten. Baldwin is almost always cast as the slimy, jerky character, which is what he's playing here, but it works within the context of the show. Sure, he might not be all that different from just about every character Baldwin plays, but the Shelten character is a great foil to Hooper, and the scenes they share are some of the best on the show.

The supporting cast do excellent jobs, except for maybe Moon Bloodgood (as Hooper's girlfriend, Rita Shelten -- yes, that also makes her Chad Shelten's ex-wife). She has plenty of screen time in the show, but I never once really start to care about her. Bloodgood's performance is just too flat for me to care if she lives or dies -- and, in fact, when she does "die" on the show (which isn't permanent, of course), I end up appreciating the fact that I won't have to see her again until the day loops.

Day Break isn't a police procedural, although it would be easy to think it might be, as it's all about the Garza case. If there's an easy cinematic comparison it's probably the Fugitive (the movie -- except, you know, with a repeating day). Both share a character, on the run, just trying to prove their innocence, and both are well written, tightly conceived thrillers.

This show is a must watch. Sadly as it's ended, you'll have to track it down at a rental store or buy it online (it's cheap!). This is a show that ended before its time, but don't worry. You'll get closure with the characters and the storyline, and even though they leave some threads unanswered for another season (which won't happen), you won't feel cheated at all.