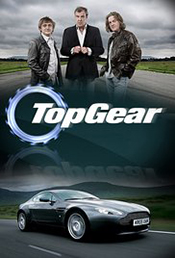 Editor's Note: This article was written before the hosts of Top Gear changed. Due to the age of this article we won't be updating it but will, instead, leave the content as it was written back in 2009.

Top Gear is a British TV show all about cars, but it's not hosted by tried-and-true car geeks (Petrol Heads in the UK, Gear Heads here in the States). Instead, it's hosted by three affable gents who (you can tell) have over time learned a lot about cars, but they still aren't the over-the-top Gear Heads. They're just average blokes who like to talk about cars.

The benefit of this is that, while they will talk about the new cars coming out, and horse power, and its 0-to-60 rating, most of what they talk about is how fun the car is to drive and how good it feels 'round the track.

In other words, it's the perfect car show for people that like to look at, and drive, cars but really don't want to get into all the niggly bits (like how the car works, or how to "tune" a car). If you aren't a Gear-Maniac, this show is for you.

The Stig is the Top Gear racing driver. Each week on the show, they'll have some new car(s) they're testing (whereupon you'll learn all about the car in the Top Gear, down-to-Earth fashion). After the hosts have given the car the once over, they'll then bring out the Stig to drive it.

The Stig is a professional driver, and they give him the car for consistency. They know that, if the Stig drives it, he'll drive it best the car can be driven, every time.

That said, the Stig is not without his idiosyncrasies. For one, you never see him -- he always wears a white racing suit and a white helmet with tinted visor. He is a man of mystery.

This leads in to one of two regular gags the Stig has on the show. Each episode, when he's introduced, the hosts will give two (blatantly fictional) factoids about him, like:

"Some say he has never tasted the air the rest of us breathe, and that he loves to commune with the whales. All we know is he's called the Stig."

Every week it's different, and equally off the wall.

The Music of Driving

The other interesting bit of about the Stig are his listening habits. Whenever he's on the track, the cameras will cut to him a couple of times while he's in the car. Each season he listens to something different (like Euro Pop, or British Speeches, or Morse Code).

Top Gear is a show meant to entertain (obviously) so when they have a challenge on the show, it's always done to be as entertaining as possible. The rules are oddly distorted, the requirements for winning are ludicrous, and it's all done for bragging rights.

The challenges break down into three basic categories:

Every Host for Themselves

Generally, the producers on the show decide that some challenge is necessary (often times just to beat up on the hosts). So they'll give them a starting objective (like buy a lorrie -- a truck to us USers) with a ridiculously small amount of money (often no more than 1000 quid) and then compete head-to-head through a variety of challenges (like drive your truck through a brick wall and see how far your truck goes if you then stamp on the brakes).

The primary goal of these challenges is, again, to abuse the hosts, but you also end up learning a bit about the vehicles. A recent challenge where they had to drive from the middle of Europe to upper England on only a single tank of gas (what seems like a mathematical improbability), showed just how good many cars' fuel systems are at managing fuel, and also showed just what kind of driving you can expect from some of the most eco-friendly cars on the market (or, in one host's case, the least eco-friendly car he could find, just to prove a point).

Hosts on a Mission

Other challenges team the hosts up together to try and beat some outlandish goal the producers decide upon. A recent case of this was where the team got a "build a car do-it-yourself" kit (a setup where all the pieces come, but nothing is hooked up -- great I suppose for Gear Heads that have something to prove, or just love to tweak and fiddle with everything).

In cases like these, the goal of the challenge is to prove two things:

Of course, you also end up learning a lot about the cars themselves, as the guys talk freely about whatever experience they're going through as they do the challenge.

A Race Against... Whatever

The third challenges usually involve pure, flat-out racing. It just so happens that they normally are racing two things that wouldn't normally be raced. Some cases include:

Often times, who wins the race isn't always the one you would have expected. To be sure, they normally try to level the playing field a little (such as, in the car vs skiers event, making the car race all the way up and then back down the same mountain the skiers are on, through all the windy roads and difficult weather than normally comes from driving on a mountain).

These tend to be fairly enlightening pieces, as the hosts are truly putting the cars through their paces, learning all the can while on the road and sharing them with the audience.

There are some other running gags and segments on the show:

Star in a Reasonably Priced Car

Each week, the Top Gear guys have a star on (TV, Movies, Music, etc.). After a bit talking about whatever project they were working on at the time, the star then gets to see a lap they did around the Top Gear racing track (recorded earlier).

What's interesting is seeing how into these activity even the most non-gear-headed stars get. Everyone wants to do well, and some of them want to do very well.

Obviously, the top of the board has the best drivers from the group (who were driving in the best weather). Further down you get the average drivers, and then, plainly, we get into the drivers who had moist , wet, and very wet road surfaces when they were on the track (some stars can't schedule for perfect days).

Only occasionally does some do terribly in the car, on a dry day, and make it into the wet zone of the board.

The Wall of Cool

Once in a while, two of the hosts will get together to compare what cars have come out and rate them in their level of coolness, going from Not Cool all the way to Sub Zero. For a while they even had a car locked away in a temperature-controlled box (far to the side of Sub Zero) because the car was just that cool.

The two hosts never agree on anything, and it usually comes down to an argument (instead of actually decided, fairly, what was cool).

And on That Bombshell

And a fair portion of the time, when the show is coming to an end, if there's a funny factoid that can be "learned", the hosts will say, "and on that bombshell, the show must end."

In the case of the car vs. skiers episode, the car lost. The factoid was (paraphrased as I don't have the actual script in front of me):

"When you have to drive up, and back down, a snowy mountain, the best car to buy is two short Frenchmen. And on that bombshell..."