Incomprehensible for All the Wrong Reasons

I'm not going to try and make out like I was a fan of the original Æon Flux. That show, started as a series of shorts on MTV's Liquid Television before launching into it's own one-season, long-form series, was weird. it was purposefully weird, mind you, and also purposefully obtuse. Much of it was designed, it seemed to confound viewers while giving them really good, futuristic, bio-punk things to watch. But whatever you might say about the show it was distinctive. Weird, mind-bending, and at time incomprehensible, but very, very distinctive. 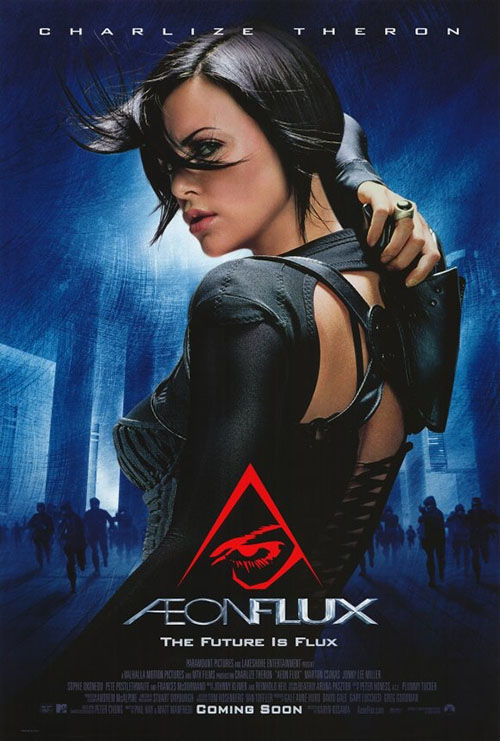 The very thought of Hollywood trying to take that strange and distinctive show and make it into a "proper Hollywood movie" is hard to wrap a mind around. Hollywood doesn't not often make weird, mind-bending, incomprehensible films, especially not when they spend $55 Mil on the budget of the movie. When you have that kind of money spent on a splashy sci-fi, techno-action blockbuster you expect it to conform to certain rules. You expect it to be a Hollywood movie. They second you try and make something like Æon Flux into a Hollywood movie, though, it stops being Æon Flux.

Coming out in 2005, Æon Flux marked the slow evolution of lead actress Charlize Theron into an action superstar (as she's go on to make awesome films like Atomic Blond, The Old Guard, and Mad Max: Fury Road). One would think that would be enough to carry this film, but the fact is that the Hollywood version of Æon Flux doesn't really know what to do with itself. It doesn't utilize Theron at all well, in any of her many capacities, but it also just doesn't work as an action film, or as a sci-fi dystopian thriller, let alone as an adaptation of Æon Flux. It's a movie that simply doesn't work in any capacity at all.

The film opens with both a text box to inform us of the dystopian future, where the last walled city of man keeps itself sealed off from the dystopian world outside, all before then going to a voice over from Theron's Æon telling us, even more, about the dystopian world they live in. Right here we're already butting into an issue of adaptation: where the original series simply dropped viewers into the action, making them figure out what was going on but also, in the process, creating a compelling hook to keep your attention, the film spends the first five minutes explaining everything to you. There's no thrill of discovery, or that hook of confusion; instead we get a lecture about the world, which sets the film on a bad foot. We're already disinterested because the film is telling us, not showing us.

Æon works as an agent for the Monicans, a group of underground freedom fighters warring against the leadership of the last remaining city on Earth, Bregna, the Goodchild regime. headed by Trevor Goodchild (Marton Csokas) and backed by his younger brother Oren (Jonny Lee Miller), the Goodchilds rule the city with an iron fist, sending their agents out to quell dissent, to take out anyone that might have ideas counter to the way the Goodchilds feel the city should be run. The Monicans was anarchy, they want chaos, and they want freedom for all. 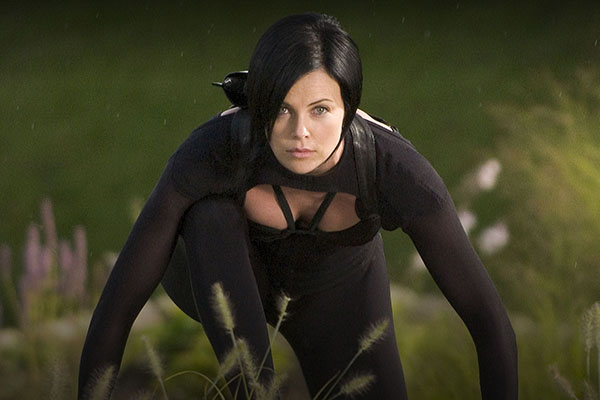 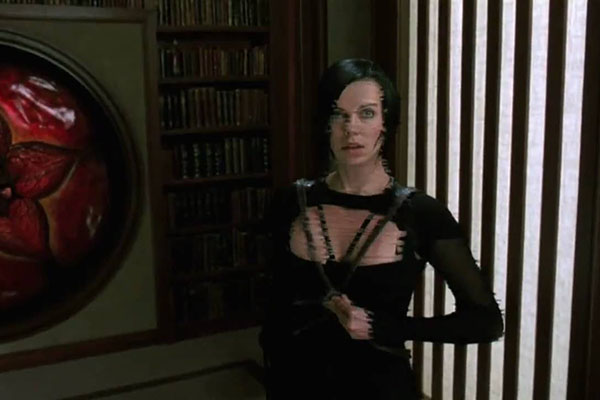 After her sister, Una (Amelia Warner) is killed by agents of the Goodchilds (seemingly as an act of retaliation against Æon and her own actions with the Monicans), Æon is sent by her handler (Frances McDormand) to assassinate Trevor. What Æon doesn't realize is that Oren is actually pulling the strings of the Monicans, using them as his agents to take out Trevor so Oren can rule. He's been watching his brother rule Bregna for 400 years (they keep inheriting the throne through cloning) and he wants his chance to be the star. Trevor, though, wasn't that bad a ruler and he's been guiding the people to protect them. It will take Trevor and Æon teaming up to potentially save Bregna from an even worse ruler that could guide humanity into an even worse age.

It really is hard to know who this film is supposed to be for. Assuming it was gears towards fans of the original series, this version of Æon Flux is so markedly different from that story -- in style, in tone, in content -- that fans of the show would have been turned off instantly. It is a glossy bit of Hollywood film-making, and individual shots and ideas are interesting on their own, but the film itself lacks cohesion, let along an interesting enough story, to keep an fans that tuned in entertained.

Worse, though, is that even as a generic action sci-fi film, Æon Flux just doesn't work. It is, honestly, a silly little B-movie in construction dressed up to look like its something more. It's story, though, is incomprehensible despite actually trying to tell a proper plot. It could have followed the original cartoon and just done vignettes that were self-contained and that, too, would have been incomprehensible but it at least would have had a purpose. This film, though, seems to just stitch a lot of plot details together and expect it'll all hold up if it just glides past them really quickly. Supposedly there's a 30-minute longer Director's Cut that the studio re-edited for the theatrical release, and it's possible those 30 minutes have all the needed story to make this film work, but that cut has never been released so who knows?

Even if the story did actually work the action of the film would still fail. As directed by Karyn Kusama, this movie has some of the worst action and editing I think I've ever seen in a sci-fi blockbuster. Presumably to cover for the lack of action-star bona fides for the various actors, all the action scenes are filmed in a very stilted and choppy way. A single sequence will have multiple edits, giving a choppy flow, often focused too close or to far away for you to actually get a feel for any stunt being performed. This will then often feature super-tight close-ups of the actor's faces as they react to some stunt they're in the middle of, which feels corny and sucks you right out of the sequence. I want to say the director was trying to mirror the same kind of "reaction angles" that were in the original cartoon, but even if we grant them that the fact is that they look awful and don't work in this form of the story. 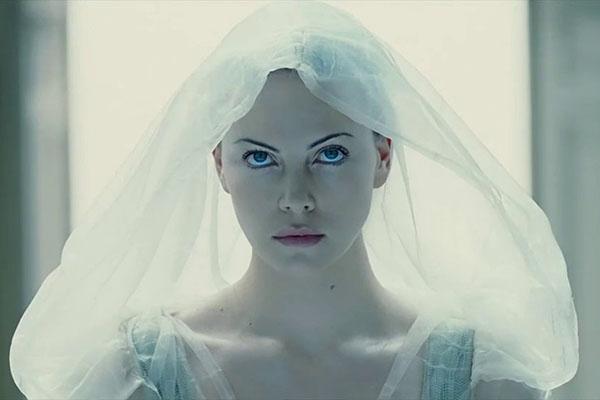 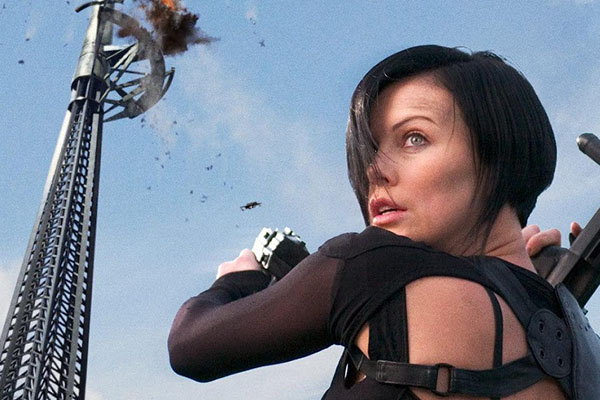 And that's before we even get to the issue with all of the actors. I like many of the actors involved in this production -- Theron, McDormand, Miller -- but the fact is that their performances here are all universally lackluster. There's an aloofness to every actor in this movie, as if they're giving their performances from a reserve. No one connects emotionally with their characters, no one seems like they're actually in the world that's constructed around them but instead just playing parts as read off a page. There's a disconnect between actor and story that never comes together in the film, this despite the solid cast that should be able to deliver this story with ease.

All around this is just a bafflingly bad film. The director doesn't seem to know how to film the movie, the actors aren't engaged, and the studio they cut the film to shreds while also forcing in explanation text and lecture monologues. It's a poorly paced, poorly constructed film, start to finish, that is just hard to enjoy on any level. The worst part, though, is that it just doesn't feel like Æon Flux. I don't understand why Paramount bothered to make an Æon Flux movie if it didn't want to actually make something that felt like the show. They sanded all the edges off, reducing the movie into something bland and generic, and the result is just as bad as any fan (or even casual watcher) of the show could have expected. Whatever this film is, it's not Æon Flux.