Aren't You a Little Small to Be a Reacher?

Tom Cruise is very good at what he does, but that's not to say he's an incredible performer. When given a specific kind of character to play, one that runs around a lot and throws themself into stupidly dangerous situations while, personally, being stoic and pretty cocky, Cruise is your man. if you go and look at all the performances he's given, the ones that work best are the characters that fit into that mold. Cruise has limited range but he plays that specific kind of character very well. 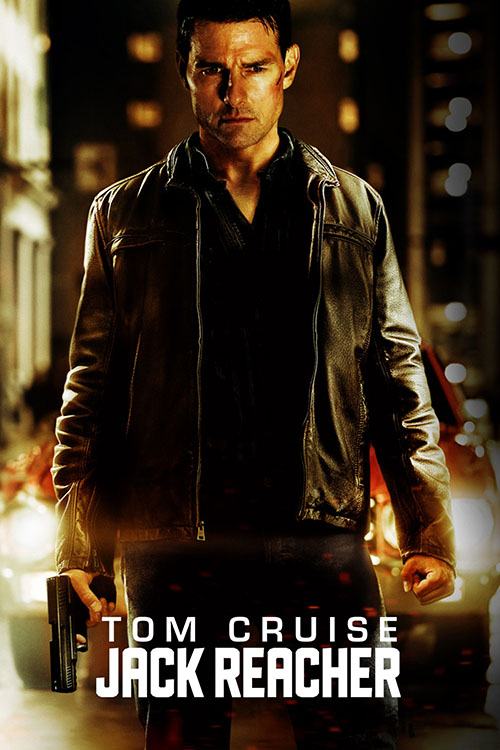 Jack Reacher is a character that, in theory, could work in Cruise's hands. Certainly the Cruise version of the character works at his best in 2012's Jack Reacher, the first of two films starring Cruise based on the Lee Child series of books. It is certainly a version of the character, though, as a key, defining trait of Reacher is that he's supposed to be a giant monster of a man. Cruise can nail the personality of Reach but he lacks the imposing stature, and that changes the whole dynamic of the character. Instead of someone that everyone thinks is a big, dumb lunk, if they don't think him a violent gorilla, you have someone that, well, is played like Tom Cruise. Everything that comes after that changes the whole dynamic of the stories.

I didn't have that knowledge the first time I watched the 2012 film but, after going through the more recent first season of Reacher, with the six-foot-five Alan Ritchson in the role, you can see why the imposing size is a key part of the role. With someone of Cruise's shorter stature in the role, the character becomes less the (highly trained) bull in a china shop to someone more like a riff on Cruise's Ethan Hunt. A guy straight out of Mission: ImpossibleIntroduced in 1966, the original Mission: Impossible featured a team of agents (with varying skills) heading out into the field to solve puzzle-box like cases on a weekly basis. This simple concept spawned a long-running series, a second series in the 1980s, and a hugely successful movie franchise starring Tom Cruise that continues today. just without the team or the gear. It works in context but the film does feel like it's lacking... something. There's an innate quality to the story that goes missing and, only when you realize the truth do you know what the film needs. It requires that imposing gorilla of a man to make everything that happens work perfectly.

The film opens with a shooter (played by Jai Courtney) driving up to the top of a parking garage and then shooting five, seemingly random, people all before driving off. The police, quickly on the scene once the ruckus was over, find a wealth of evidence -- a casing left behind, a thumb print on a quarter in the parking meter, video cam footage of the van's license plate -- all of which leads them to James Mark Barr (Joseph Sikora), an ex-military sniper with a checkered past. Everyone assumes Barr did it, but instead of confessing to the police, Barr simply gives them three words: "Get Jack Reacher".

Reacher, as we learn, is an ex-military man himself. The head of a group of military police, Reacher is someone that would go into crime scenes and solve the cases. Every time. He was damn good at his job, even if he had a tendency towards insubordination otherwise. After leaving military life Reacher went "on walkabout", disappearing into the U.S. and living off the grid. He shows up, though, to investigate the Barr case not because he thinks Barr is innocent but because he figures the guy is guilty (from that checkered past). Working with Barr's attorney, Helen Rodin (Rosamund Pike), though, Reacher soon suspects a huge conspiracy is behind the killings, and that at least one of the victims wasn't random at all. Now he has to get to the truth before the conspirators kill him, and Helen. 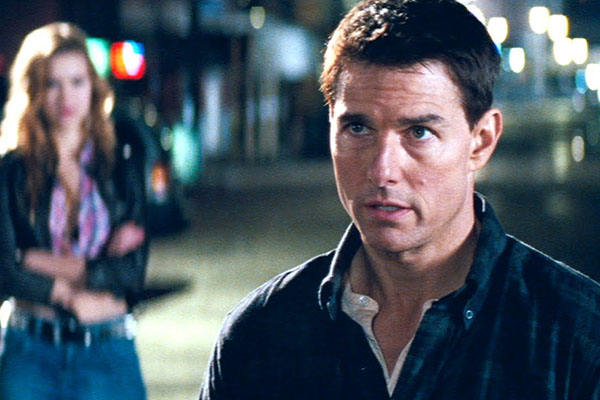 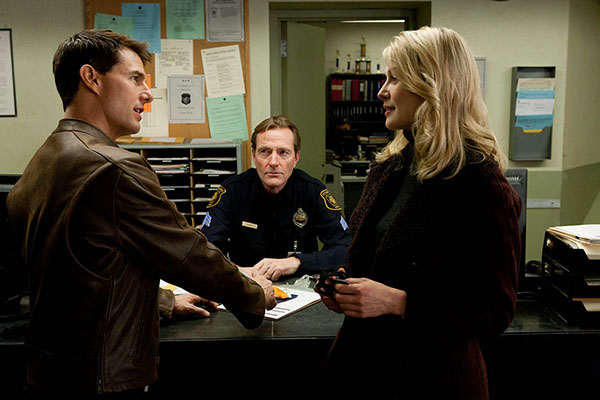 I will admit that I haven't read the various Reacher novels but it's pretty clear from the stories I've seen (this movie, it's sequel, and the TV series) that these are all military pot-boilers. Child knows his details, and he can write and interesting and effective character, but at their core the stories do all seem to be the same: Reacher is dragged in from his walk-about because of some complex crime, and as he digs in deep he uncovers some deep conspiracy that, in the end, requires him to use his "particular set of skills" to kill a lot of dudes and save the day. While I'm sure the novels all have very interesting variants on this premise, the stories adapted on screen so far all fall into this same formula.

Thus, instead of focusing on the story we have to go with how the film adapts it, what it gets right, what it gets wrong, and whether it's a worthy edition in its own right. And as far as what the film gets right, that would be bringing in Cruise's creative partner on most of the Mission: Impossible films, Christopher McQuarrie. McQuarrie, (who did script treatment work on Mission: Impossible - Ghost Protocol, wrote Edge of Tomorrow, and has written and directed every Mission: Impossible film in the series since Rogue Nation on) knows how to get a solid performance out of Cruise. He can craft a script that plays to Cruise's strengths, keeping things active and engaging. McQuarrie is a master at getting Cruise to be interesting, and that's no different here as the film has that right energy.

Clearly Cruise isn't a giant man so McQuarrie remakes the character into the mold of Ethan Hunt. That's a character Cruise can play, physically and mentally, and it still conveys a certain amount of that "one man army" vibe that Reacher should have. In most sequences it works, with Cruise's character working his way through problems with his brains, and then some guns. You do believe that this guy could be a solid military detective, a Sherlock Holmes for the Army crowd. That part of the film is effective.

Where it doesn't work is in the fight sequences, any point where Reacher is supposed to punch his way out of a bad situation or take on a force that he is clearly out-matched to handle. There's a fight where Reacher takes on five guys at once and, were he a six-foot-five hulk it would be believable. But Tom Cruise has neither the size, nor the fighting prowess, to sell these fights. The movie wants us to believe he can take on five burly guys, or win in a match against actual gorilla-of-a-man Jai Courtney, but it just doesn't work. He doesn't have the physical skills to pull it off. Cruise can make throwing himself off a building work, but throwing himself at a bigger dude just looks silly. 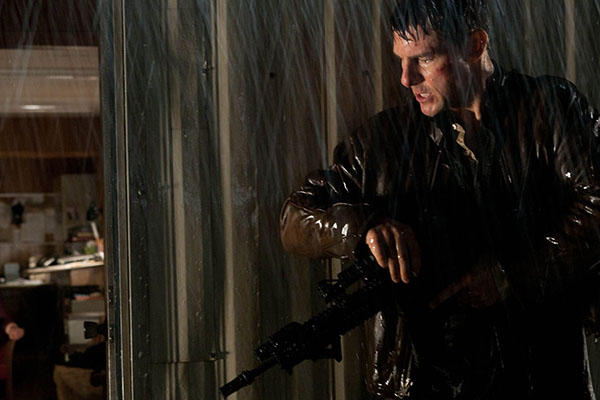 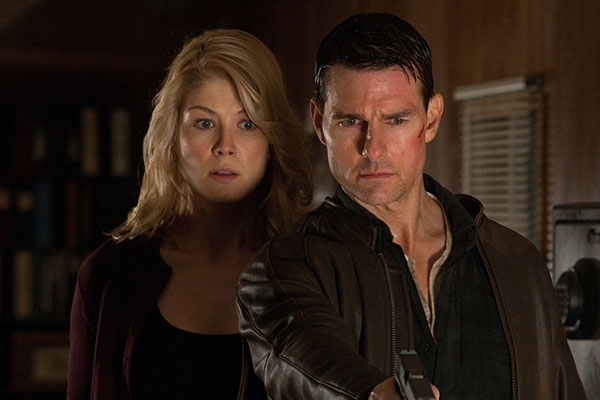 The plot is also pretty bog-standard potboiler fair. I think the film actually does a disservice in this regard as we're show, from the very beginning, that Barr isn't the shooter. If the film had kept that hidden, had obfuscated who the bad guy was, I think it could have made for an effective mystery. At the very least it would have allowed for some solid villain reveals. The film undercuts its own story, though, blowing its load in the opening scene. Thus is become Reacher solving the details of a case instead of getting the big pay-off.

Even if it had kept things a little more shadowy, though, I don't think the plot would have really risen to great heights. It's not a bad story by any measure, but it is pretty expected within the conspiracy action genre. The clues, and twists, all comes in the usual formulaic measures and the film wraps itself up with a neat bow just like you expect. It's not challenging or difficult at all, just a pretty bog-standard Cruise and McQuarrie action film.

Thing is, a bog-standard Cruise and McQuarrie action film is still pretty watchable. While it may not be one of their great movies it's a solid little watch that entertains while it's on. There are improvements that could be made, a rewrite to the script and a recast of the lead, but in its current form Jack Reacher entertains. It doesn't have to be great to be a solid little time while it plays out.