Don't Go Into the Wine Cellar

The Prom Night series had gone through a strange evolution up to this point (and that's discounting the 2008 reboot). We had the original Prom Night with Jamie Lee Curtis that played like a low rent, knock off Halloween. This was followed by Hello Mary Lou: Prom Night II that went the supernatural route to become more like Nightmare on Elm Street 2: Freddy's Revenge, before evolving into a horror comedy with the third film (which, sadly, isn't available for us to watch anywhere currently, leaving a gaping hole in our coverage). And we have the fourth movie that goes back to being a normal slasher flick, except with a weird religious angle. 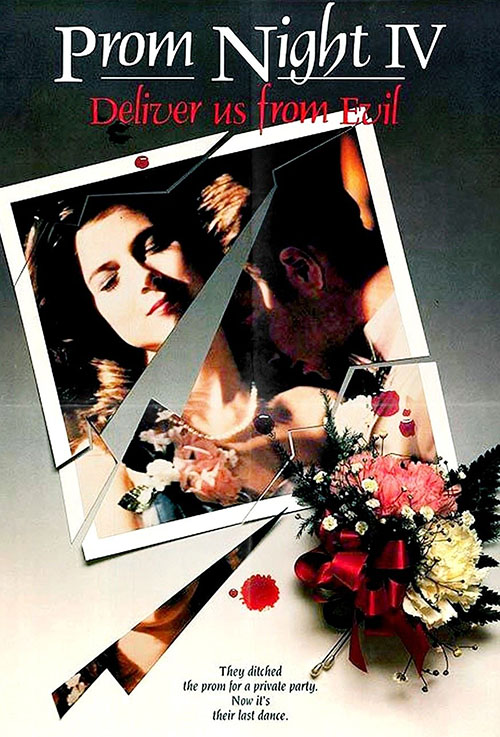 Oh, and it's not scary at all. Prom Night IV: Deliver Us From Evil is a Slasher film that forgets the cardinal rule of horror films: you have to actually bring the horror. It has teenagers, blood, sex, nudity, and a killer, but the magical ingredient that takes all of those items and brings it together as an actual proper horror film is missing. Call it a bad story, or directorial ineptitude, but this film is a bad horror movies. And since it's trying to be a horror movie, that means it's also a bad movie, start to finish.

Things don't start well in the opening act. At the 1957 Hamilton High Prom (which, you will note, would be the same Prom where Mary Lou dies back in Prom Night II, making that the most cursed Prom ever, or this film just ignores everything else in the series) when two loves head out to their car outside the high school to get down with a little hanky panky. Their love fest, though, is interrupted by a crazed killer who immediately offs both of them because they're sinners and harlots and deserve to die. Really, the killer is just saying the rules of a horror movie out loud. The killer, as it turns out, is Father Jonas (James Carver), a crazed priest who really had it out for teenagers looking to have a good time. He's quickly captures by agents of the Church, and the whole matter is hushed up for other 30 years.

Of course, that kind of thing couldn't last forever and even though Jonas was locked up and sedated for three decades, he wakes up, breaks out, and looks to get his murder spree on once again. Those damned teenagers have to be taught not to have sex, and the only way to teach them is via the edge of his crucifix sword. His next victims, as it turns out, are to be Meagan (Nicole de Boer), Mark (J.H. Wyman), Laura (Joy Tanner), and Jeff (Alle Ghadban), four teems who skip out on the Hamilton High Prom to head off to Mark's parent's summer home for a weekend of sex and debauchery. Somehow the mad priest follows them and turns their weekend of fun into a night of horrors that won't soon be forgotten (by the characters anyway; audiences probably forgot about by the time the credits rolled).

The first issue with Prom Night IV is its production values. In fairness to the film, none of the films have been that great looking, with even the first movie looking like every bit of its low budget. But this film seems super cheap even by those standards, much more like a made-for-TV special than a film released into theaters. It was a short run, but the film did get a limited release before heading to home video and I have to think every person in the audience felt like they overpaid for that "pleasure" at the time. 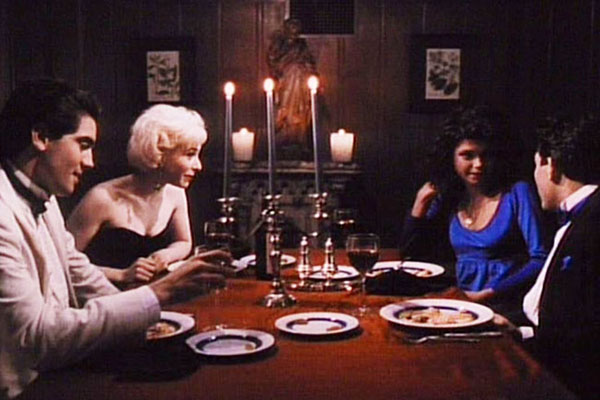 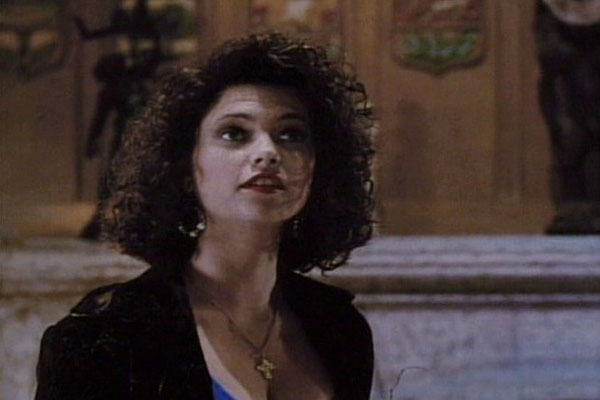 The cast of the film is game enough, and there is at least one low-level star among the set: Nicole de Boer. Although she's far from A-list she has appeared in Cube (which is a great, low-budget horror film), The Dead Zone, and Deep Space Nine (as Dax in the last season of that show). Of course, all of that came after Prom Night IV, but de Boer is the one actor showing real talent in this film. She also gets to play the Final Girl, which helps the film some.

But the big issue, of course, is the fact that the film lacks any scares. I've gone over this repeatedly in this "Slasher Cinema" column, looking at all the ways Slasher films have failed to actually find any scares and this movie commits all the basic sins those other films have. The biggest issue: it rushes all the kills. It either leaps ahead to after the deed is already done, or simply has a character wander somewhere only to immediately get killed. Very rarely does it try to build anticipation to any of the deeds that are about to happen, never finding time to build up the suspense.

Part if that problem is that we know who the killer is from the outset: the mad priest. By giving us a killer like Father Jonas, someone without any relatable qualities at all, we have a hard time understanding the villain or his motivation to kill. Being able to get in the shoes of a killer isn't always necessary, but the best Slasher killers either have a personality we can enjoy (Freddy) or have some kind of motivation to kill (like revenge) that we can understand (like Jason). You gotta have something to latch onto.

Take the 2008 reboot of this series. There we had a killer he lusted after the Final Girl and simply wanted her for himself (and was willing to cut his way through anyone that was between him and the girl). While it's not a motivation any of us would feel, it's at least something we can understand from his perspective. It gave us motive, it gave us reason. That was enough to fuel the story. Here, though, Jonas is such a raving lunatic that there's no way to understand him or care. And when all you have is a bunch of disposable characters without real development you have to get something off someone. The killer doesn't provide that. 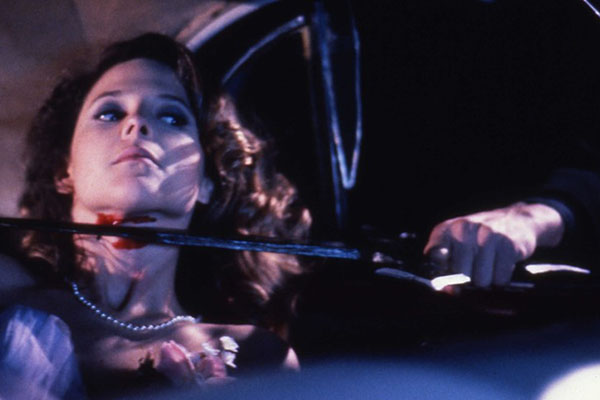 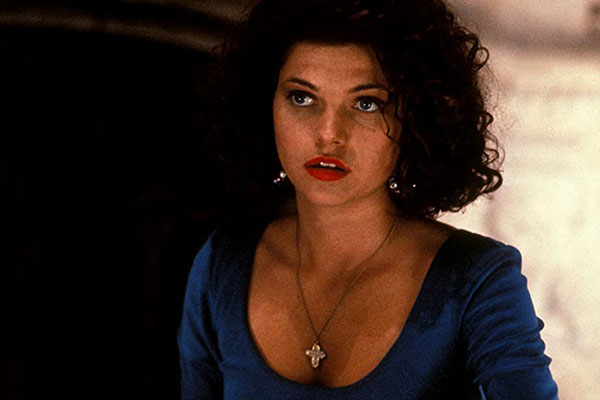 It doesn't hep that his motivation -- as he put it, to kill all the "harlots and whores" -- doesn't even come in to play in the last act. Our heroine, Meagan, is a virgin (and remains so due to the priest getting in the way of her sexy times). If he wanted to kill the sinners than Meagan shouldn't be on his list. At some point he should come at her with a knife, raving about her lustful deeds and she should scream back, "I'm still a virgin!" That would give him just enough pause for her to kill him, or run away, or something, but it never comes up. The film can't even be consistent about motivations and character backgrounds. Put another way, rifles setup over the fireplace fail to go off by movie's end.

This is one of those films where I don't think there's any easy way to salvage the piece. It would have required a real rewrite, and someone that cared more about the production behind the camera, to really get this piece off the ground. Instead this is a leaden sequel that closed out the original run of films before the 2008 reboot tried to kick it back into life 16 years later. I've seen a lot of bad Slasher films but rarely am I so bored as I was with this film. Prom Night IV is just a chore.

An attempt at premarital sex. A couple at the 1957 Prom head out to a car and start making out.

Before they can even get further than some heavy petting, though, a guy breaks in their window, slashes the girl's throat, and then stabs the guy to death. Not exactly a happy Prom experience, but then there never is in these films.

Eight. The 1957 couple, plus a priest, a sex-crazed truck driver, the kid brother, three prom goers. But probably not the evil priest.