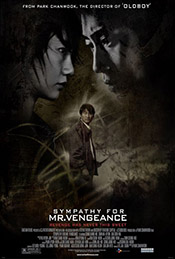 South Korea is not usually known for its cinematic masterpieces, but one can find a terrific film in Sympathy for Mr. Vengeance. Known as Boksuneun Naui Geot in Korea, Sympathy for Mr. Vengeance follows the life and trials of a poor, deaf-mute named Ryu (played by Ha-kyun Shin); who works for little money at a local (Korean) factory until the fateful day he is fired.

What makes matters worse (aside from being deaf, mute and unemployed) is that his sister, in need of a kidney transplant in order to live, depends on Ryu's small income to survive. Shortly before his termination, Ryu finds out that his blood does not match his sister's, thus he cannot donate one of his own kidneys. With his sister's health waining, and running out of options to keep her alive, Ryu turns to black market organ dealers.

After being scammed, Ryu's doctor contacts him and explains that they found a donor for his sister and the operation would cost 10,000,000 Won, the exact amount that was stolen from Ryu. Needing cash fast, Ryu and his leftist revolutionary girlfriend Cha Yeong-mi (played by Du-na Bae) conspire to kidnap Ryu's old boss's daughter for ransom money. Later, however, Ryu and Cha decide to kidnap another factory owner's daughter to avoid suspicion from the police. While the kidnapping, at first, is going very well for Ryu, a single accident will affect the lives of all involved: misfortune and tragedy will soon follow Ryu which cause a chain-reaction ending in bloodshed and even more despair.

The film's director, Park Chan-wook, provides the viewer with a surreal look into the mind of a man on a quest to save his beloved sister. Sympathy for Mr. Vengeance is the first film in Park's legendary "Vengeance Trilogy" (followed by Oldboy and Lady Vengeance) and, like the other two films, was spectacular. The acting was superb, there was not a single actor who did not play their role convincingly; even the little girl that played the kidnap victim, Yu-sun (Bo-bae Han) was completely in character and convincing throughout her scenes.

The real praise, however, really goes to the actor who played Yu-sun's father, Dong-jin (played by Kang-ho Song) and Ryu (who, again, was played by Ha-kyun Shin). Both of the characters are disturbingly deep, and are actually decent, generally moral, people. However because of the specific and depressing series of events that happen throughout the movie, both have to resort to the unforgiving side of human nature: revenge.

Under the direction of Park, the cinematography and direction is nothing less than breathtaking and flawless. The movie flows well and completely immerses the viewer into the minds of the rich characters, which is enhanced by the near perfect camera work. Park's message is seen clearly in this movie: vengeance effects and touches all involved and almost always ends in heartbreak and regret.

While amazing, this film is not for everyone, especially those who cannot stomach torture, gruesome murders, and blood in general. Being a film about vengeance, there is quite a bit of violence in Sympathy for Mr. Vengeance; and because the actors portray their roles so well ... it is especially heart wrenching seeing some of the violence take place.

On a similar note, this movie is not uplifting in any way; it is both depressing and haunting. The reality of this movie is very grim, and what makes matters worse is when the viewer fully realizes that blind vengeance could force these depressing events onto people they hold dear to them, but, realistically, not to the full scale as Sympathy for Mr. Vengeance. This film clearly shows the brutality of vengeance on a small scale; and provides proof that vengeance does not make up for losing a loved one and that it often makes the situation worse and the outcome more depressing.

Sympathy for Mr. Vengeance is a great film with a great cast, and an even more amazing director. If you can stomach the violence, and are in the mood for an honestly great piece of storytelling, you will not leave disappointed by this movie. You will find yourself trying to decide who is justified in their actions, and will feel remorseful for Ryu, who was forced to make some awful choices. Whether you consider yourself a good person or not, while watching the movie, you immediately feel sympathy for Mr. Vengeance.